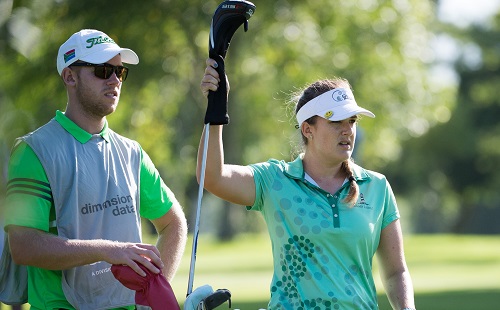 Lee-Anne Pace looked to have blown her chances on the first day of the Sunshine Ladies Tour’s Dimension Data Challenge, but the defending champion rallied with a birdie flurry to finish two off the pace from Nicole Garcia and Carrie Park from South Korea at George Golf Club on Friday.

Pace hit the front with a trio of birdies in first four holes, but bogeys at seven and 10 started a downward spiral that opened the door for Garcia and Park.

Garcia racked up four birdies and led by one shot from Park on three under through the turn.

She never relinquished control after birdie number five at 11 and seven straight pars down the homeward stretch saw her set the clubhouse target at four under.

Park, meanwhile, also worked her way around the parklands layout in 68 blows. Like Garcia, the 2017 SA Women’s Masters winner dropped the par four ninth and turned two under, but a brace of birdies at 11 and 14 handed her a share of the lead.

Pace gave to more shots away at 13 and 14, but target-seeking six-irons into 17 and 18 for back-to-back birdies saw the three-time Chase to the Investec Cup for Ladies champion close with a two under 70.

“I fell flat on my face down the back nine,” said Pace, who shares third with former SA Women’s Open champion Tandi von Ruben.

The pair finished one shot clear of Anne-Lise Caudal from France and two shots ahead of Gauteng amateur Chiara Contomathios and English duo Rebecca Hudson and Kiran Matharu.

“I played really well on the front nine, but I lost concentration completely and I played the par fives horribly, too. But I birdied two of the toughest holes coming home and that gave me a boost. I hit six-iron into both greens and made both 10-footers.

“Nicole played really solid and Carrie is always a very strong contender, but I’m definitely not out of it. I just need to take advantage of the par fives and roll in some birdie putts on Saturday and it could get really interesting over at the Outeniqua Course on Sunday.”

Garcia is heading to the Ladies European Tour in April for a third successive year and was thrilled to hit a spot of form while still adjusting to swing changes.

“I switched coaches earlier this year and there is still a lot that of room for improvement, but everything is definitely moving in the right direction,” said the former Sunshine Ladies Tour winner.

“I had no expectations coming to George, but this is my favourite golf course in South Africa and it loved me back today. The course is in fantastic condition but greens are tricky. I made some really good putts on the front nine; they just stopped dropping on the back nine.

“They gave us quite a lot of tough pins, and I battled a bit to judge the pace. The uphill putts are quite slow, but the downhill ones are slick and fast. I’m really happy with a 68, though. If you offered it to me this morning, I would have taken it and gone to the beach.”

Park is targeting a second win this season to strengthen her position in the Chase to the Investec Cup for Ladies standings before she heads to Korea.

“This has been my favourite golf course in the Western Cape since I moved to South Africa and started to play the amateur circuit, so I was looking forward to this week,” said 19-year-old Park.

“I’m really pleased that I finished right up there on day one. I’m off to Korea in a few weeks, so I am definitely looking for a top three finish with such a huge prize fund on offer.

“I played very solid tee to green and I hit the ball really great. I was struggling a little in the practice round, but I worked with my coach yesterday and it all felt great out there. The pins were tucked, but I made a lot of putts. That’s always good at this course.”

“We had so much fun out there,” said Park. “I just love Ladina, because she’s a very good golfer, but she doesn’t take things too seriously. We dove-tailed well and we laughed a lot. That was the combination that took us to the top.”