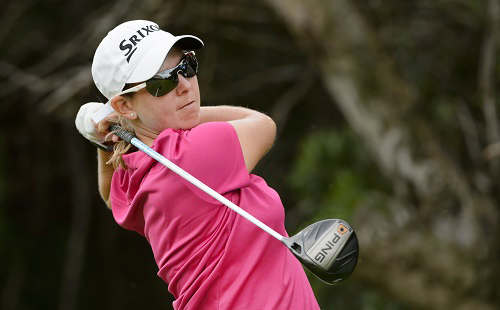 South Africa’s Ashleigh Buhai reeled in three birdies on the back nine of Westlake Golf Club to race into the first round lead of the R2-million Investec South African Women’s Open on Thursday.

Buhai made the most of the tranquil conditions in Cape Town to fire a three-under-par 69 and opened up a one shot lead on the three-way tie for second.

“I saw at the turn that the leaders were on two-under, so I set myself a goal of three-under,” Buhai confessed. “We were very lucky with the conditions, because the wind didn’t blow as it did during the pro-am. I knew there would be a few under out there and I was very patient.”

Buhai leads by one shot from big-hitting Bonita Bredenhann from Namibia, who set the clubhouse target alongside fellow early starter Silvia Bannon from Spain. Germany’s Karolin Lampert joined the pack at two under in the late afternoon.

Buhai won the Investec South African Women’s Open twice as an amateur – first as a 14-year-old at her home club, Royal Johannesburg and Kensington in 2004 and again just before she turned pro in 2007 at Durban Country Club.

She’s made no secret of her desire to capture the prestigious title a third time over the last couple of years and came into the week with a winning mind-set.

Buhai started the 2018 Sunshine Ladies Tour season with a runner-up finish in the Canon Ladies Tshwane Open and claimed her eighth trophy with a commanding wire-to-wire victory in the Joburg Ladies Open a week later.

Then she jetted off to Australia for a three-week stint on the LPGA Tour. “I was a little jetlagged coming home and caught a cold somewhere along my travels, but this morning I felt right as rain and ready to go,” said Buhai.

She cancelled a bogey at the second with a birdie at eighth to turn level, and holed a 20-footer at the par-four 12th to spark some momentum on the back nine.

“I’d been very patient up to that point, but sometimes you just need to make some good pars to keep the round going,” said the 27-year-old Edenvale native. “I put a really good stroke on the putt at 12 and that got me into red numbers.

“I nearly holed out at the 15th and I was so sorry the ball didn’t drop. They’ve put up a painting as a hole-in-one prize and Dave (Buhai) and I just bought a flat, so we could use some art. I hit a really good approach into 18 and finished pin-high left, about 20 foot from the pin.

“It was quite a tricky little putt and Dave and I both had a good look. I decided to hit it inside right and it went right in. Winning this as an amateur was huge for me, but now, with two Major starts in play, it’s really something I’d like to get done this year.”