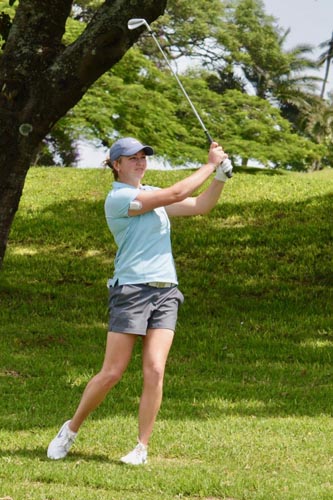 On a windswept San Lameer Country Club on Thursday, just three players bettered par in the opening round of the Sunshine Ladies Tour South African Women’s Masters, with Sweden’s Sofie Bringner leading the way on one-under-par 71.

Hot on her heels were Scotland’s Hannah McCook and GolfRSA Elite Squad amateur Symone Henriques, who shared second with rounds of level par 72.

Hailing from Gleneagles Golf Club in the heart of Scotland, McCook said her experience in the wind did not give her much of an advantage on the KwaZulu-Natal layout.

“Everyone was joking that because I’m from Scotland, I should be used to the wind, but this is a much warmer wind and it’s tricky,” said McCook. “Into the wind was hard, but you just have to try and control your ball flight.”

Starting on the 10th, McCook began with three pars before a birdie-bogey exchange at 13 and 14 took her back to even.

A birdie at the par five 17th saw the 25-year-old turn in one-under. Her second nine was more of a struggle with a bogey at the par three fourth and a double drop at the sixth, but the former Scottish Golf National Squad player managed gains at the two par fives – holes one and eight – to post an impressive score in difficult conditions.

“I was quite solid out of the gates,” said McCook. “I was one-under through six and two-under through 10. I did well to get it back to level par after a little bit of a mishap on six.

“The wind got stronger as the round went on, it was definitely a bit calmer at the start. It dropped a little during the middle of my round but picked up again at the end. Playing the sixth hole into the wind was extremely tricky.” 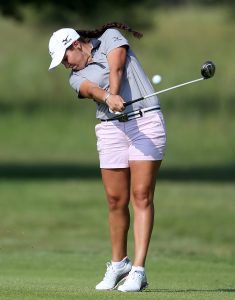 Henriques offset bogeys at the first and 12th holes with a brace of gains at five and 18.

“It was quite exhausting out there, because you really had to be patient and plan every shot,” said the Glenvista golfer. “I managed to overturn my bogeys and made some great par-saves to keep the round going. The birdie at five gave me some nice momentum and it was great to birdie 18, because that is always a very intimidating hole in the wind.”

“You have to think a lot more about what kind of shots you want to play,” Bringer said. “The most important thing for sure is keeping your ball in the fairway, if you can do that you can score.”

In fact, Bringer holed a couple monster putts in her five-birdie, four-bogey round. “It was a solid round of golf and I made a few good putts. I made some longer ones, like five or six-metre ones on the 11th and fourth.”

Magnusson said she was particularly pleased with her round.

“I’m happy with the round. I made five birdies, because I hit a lot of good shots, but also there were some bad ones thrown in there too,” said the Ullna Golf Club representative. “It was really hard playing in the wind, but sometimes I really enjoy playing in those conditions. But yeah, it was tough out there.”

Lurking ominously on two-over and by no means out of it is Investec Property Fund Order of Merit leader Nobuhle Dlamini. The three-time Sunshine Ladies Tour winner from Swaziland shares seventh place with Spain’s Maria Beautell.

END_OF_DOCUMENT_TOKEN_TO_BE_REPLACED

Williams takes route 66 to join Bringner at the top