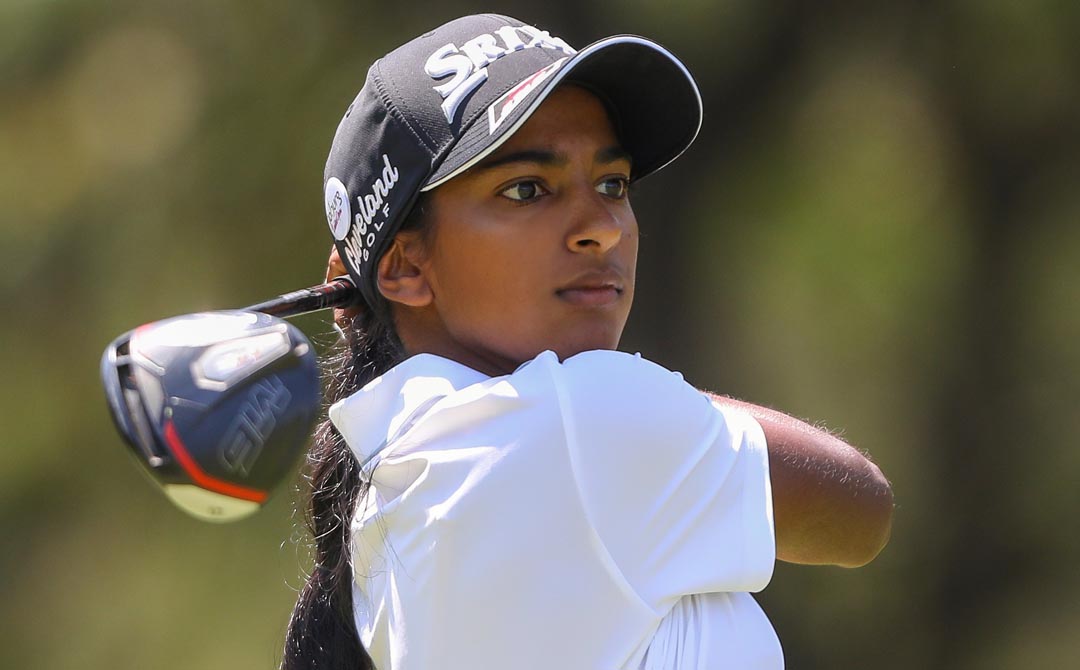 CAPE TOWN – The next generation of golfing stars are ready to step into the limelight when the Investec SA Women’s Open tees off on Thursday.

A vicious south-easterly wind ravaged the championship layout during the qualifier, with a 55 km per hour gale pushing the field to their limits as they vied for five coveted spots into the Ladies European Tour co-sanctioned event.

Moodley stands 1.5 metres tall in her socks and weighs just 45kg, but the former Youth Olympian put up a valiant fight. She was gob-smacked, however, to learn that a frustrating nine-over-par 81 netted her the runner-up spot.

“I was absolutely horrified by my score, until Nicole Garcia and Stacy Bregman told me that it was a great score given the conditions,” the 18-year-old GolfRSA Elite Squad member said.
“I thought I didn’t have a chance. I was ready to fly home. We were standing around exchanging war stories when they came walking back to the clubhouse. They called it quits after two holes. They said par was at least 76 or 77 in that wind and they were confident I would make it.

“I couldn’t believe it when I finished second, but I’m definitely not complaining. It’s a dream come true to tee it up in the Investec SA Women’s Open. I’ve played a few Sunshine Ladies Tour events this season, and you can’t put a price on the experience you gain playing with the professionals.”

Moodley finished one stroke shy of winner Clara Pietri from Switzerland, while Wernich from Stellenbosch carded 83 to finish behind third-placed Christina Gloor from Sweden.

Lanky Brown from Steenberg, who plays out of neighbouring Steenberg Golf Club, came into the event fresh after a joint runner-up finish in the Nomads SA Juniors International at Rondebosch Golf Club. The 16-year-old clinched the final spot with a round of 84.

Moodley, a member of the Ernie Els and Fancourt Foundation, said it was a shock to arrive to a windless Westlake for the practice round on Tuesday.

“The wind was so brutal in the qualifier that I had to take two to three clubs extra,” she said. “For instance, I teed my ball up low and hit my driver about 210 metres. I hit 3-wood for my second and still finished about 50 metres short of the green and had to chip and putt to save par. In Tuesday’s practice round, I hit a normal drive, reached the green with a 5-wood and made a good birdie.
“I was really lucky to play nine holes with Nicole and Stacy. They gave me lots of advice and it was great to get an inside look to their processes and their course management. I’m really looking forward to getting the championship underway.”
Williams, who ranks second on the GolfRSA Open Amateur standings, caddied for fellow Western Province junior Jordan Rothman last year and is champing at the bit to get her own campaign underway.

“I was still struggling with my knee, so I couldn’t tee it up. It was really interesting to be on the bag, though, and to absorb the atmosphere and the splendour of the event. I also watched the professionals closely and learned a lot about course management and mental strength.”

The Durbanville golfer went under the knife late last year, but her knee held up really well during the recent Aon SA Amateur, where she tied for third in the stroke play championship. She also reached the semi-final with Moodley in the match play championship.

“It’s great to back to full speed again. I think, aside from winning the SA Women’s Amateur and Stroke Play, all amateurs dream of playing the national open and for me personally, it’s a dream come true. I am definitely a better golfer now and hopefully I can put everything I’ve learned in the last 12 months into practice at Westlake.

“It can be very intimidating to play with the pros, so I’m just going to do my level best not to let the occasion trip me up. I want to treat it as any other golf tournament and focus on playing the course.”

For the professionals, victory will come with a winner’s exemption on the Ladies European Tour, starts in the AIG Women’s British Open and Evian Championship, the lion’s share of the €200 000 purse and the coveted trophy.

The leading amateur will lift the Jackie Mercer Trophy and stand alongside the 2020 champion in the winner’s circle. “I am sure the trophy will be in there somewhere in the back of everyone’s minds, but I think we will be more focussed on hitting the best shots we can make, while learning as much as possible from the experience,” said Streicher from Swellendam. “It’s the real big leagues and it’s an incredible opportunity for us to learn and gain experience. I can’t wait to get started.”