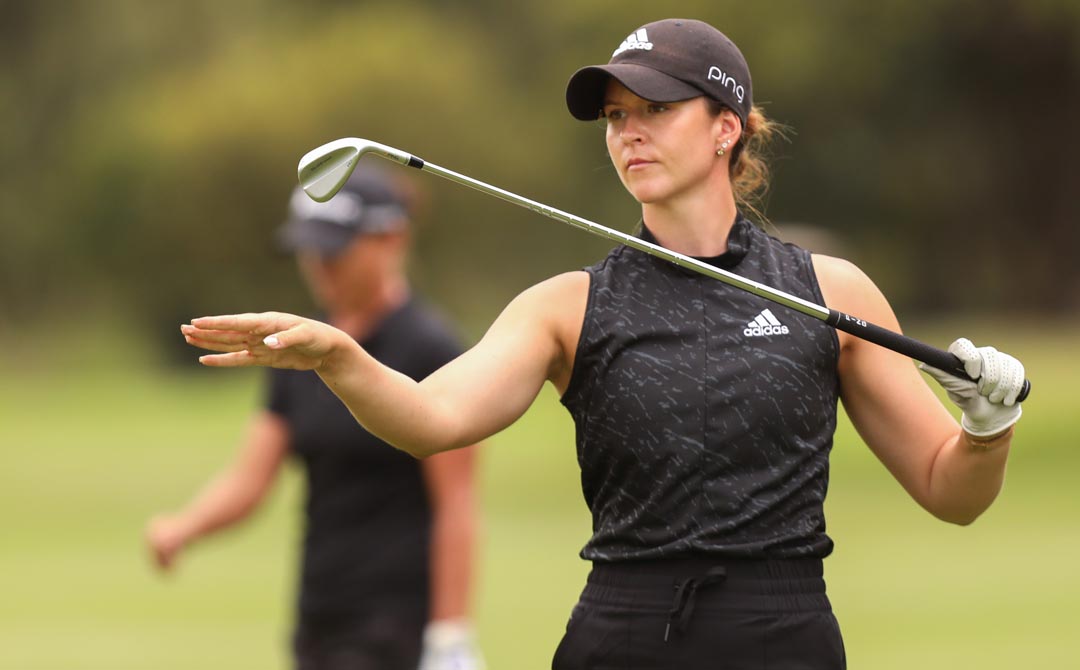 Johannesburg – Sweden’s Linn Grant moved in on a maiden Ladies European Tour with a four-under 69 on moving day to co-lead the Joburg Ladies Open, while South Africa’s Nicole Garcia is still very well-placed in the chasing pack with one round to go in the co-sanctioned event at Modderfontein Golf Club.

The reigning Investec Order of Merit leader – already a two-time winner in her rookie season on the Sunshine Ladies Tour – made the most of an early start and windless conditions to move into pole position.

Grant’s clubhouse target looked to go unchallenged until first round leader Maria Hernandez from Spain overcame a bogey-start late in the day and signed for a one-under 72 to grab a share of the lead in the €250 000 event on five-under 141.

The pair will start the final round one shot clear of 2020 Investec South African Women’s Open champion Alice Hewson from England, who carded 70, and Kim Metraux from Switzerland, whose 68 was the low round of the day.

Local favourite Garcia fired a 71 to finish two off the pace in a tie for fifth with American Kelly Whaley (69), Frenchwoman Emma Grechi (71) and Alexandra Swayne from the US Virgin Islands, who returned respective rounds of 69, 71 and 72.

Welsh golfer Becky Morgan is also still in the mix at two-under after a round of 70.

It was a tale of resilience for Grant, who opened with a 69 in the blustery first round conditions. After an opening birdie, the 22-year-old recovered admirably from a bogey and double bogey on the third and fourth holes with an eagle on the par-five fifth to pull herself back up the leaderboard.

The wind-still conditions early in the day also helped for the 2017 PING Junior Solheim Cup player on the homeward loop. She reeled in birdies on the par-fives (10 and 13) and the par-three 14th to put herself in a great position to challenge for victory.

“I had a good day out there. I didn’t really get the putts rolling in, but I played well on the par-fives, so I managed to get a good score,” Grant said.

“There was no wind, and the weather was really nice. I just thought I had a lot of birdies in me, but then I started stumbling a little bit. I hit a great shot into five and had a tap in eagle to get back level, and then it carried on from there.”

Grant is no stranger to taking victory on South African soil, having already tasted success twice on the Sunshine Ladies Tour in the Dimension Data Ladies Challenge and the Jabra Ladies Classic last month.

Her hopes of making it three wins in four events on the Sunshine Ladies Tour were boosted with Friday’s strong showing, as she made the most of her length off the tee to give herself plenty of scoring opportunities.

And with the chance to claim an LET title in her first event as a full member, the Swede is looking to keep that momentum going heading into the final day.

“I gave myself better angles into the greens off the tee on the par-fives today and shorter approaches, so I kept going for the greens and two-putted my way to birdies. The finish here is quite tough so I tried to keep it simple,” she said.

Hernandez, whose last visit to the winner’s circle was at the Allianz Ladies Slovak Open 12 years ago, produced a steadier second round.

Things didn’t start brilliantly for the 36-year-old, as she dropped a shot on the tenth – her opening hole – but birdies on the 13th and fifth negated another dropped shot on 15, before she made hay on the par-five eighth to finish one shot to the good.

“It wasn’t as easy as yesterday. I was hitting good shots but with too much club. I played solid, but I struggled a little bit on the greens today but at least I finished well and made some good putts coming in,” she said. “If I’m telling the truth I don’t think about winning. Tomorrow is a new day and a new challenge, so I’ll just go out and try to play my best.

“There will be so many challenges and we don’t know what is going to happen, so I just have to play shot by shot. If, at the end of the day, everything goes well then great, and if not, you have to take the positives and go into the next week.”

A host of players still capable of making a late break including Garcia, the leading South African, who is also chasing a maiden LET victory. She still struggled with her swing, but a hot putter kept her contention.

“I started a bit slow and didn’t take advantage of birdie opportunities on the par fives on the front nine that I could reach, which was a little disappointing, but other than that I’m happy with the result,” said the Ebotse golfer, who offset a lone bogey with a trio of birdies.

“I’m still struggling with the strike, especially on the approach shots with the longer irons, but I’ll go work on it later and hopefully I can make the most of the scorable holes tomorrow. The putter is behaving well and it helped me a lot to make crucial par saves, so that’s a big positive to take into the final round.”

The next best South African is GolfRSA’s No 1-ranked amateur Isabella van Rooyen, who is making the most of her sponsor’s invitation.

The Clovelly golfer fired three birdies to negate a lone bogey for a 72 to finish in the tie for 10th on one-under. “I’m really happy with my performance so far,” said the 19-year-old. “I said before the start of the tournament that my only goals were to make the cut and to improve on my previous results, and so far, so good. I’ve really enjoyed the tournament so far and I’m looking forward to the final round, because it presents another opportunity for me build experience and learn from my playing partners.”

PHOTO: Reigning Investec Order of Merit leader Linn Grant from Sweden has moved into a strong position to challenge for a third Sunshine Ladies Tour title and a maiden Ladies European Tour victory at the 36-hole mark of the €250 000 Joburg Ladies Open at Modderfontein Golf Club; credit Sunshine Ladies Tour.