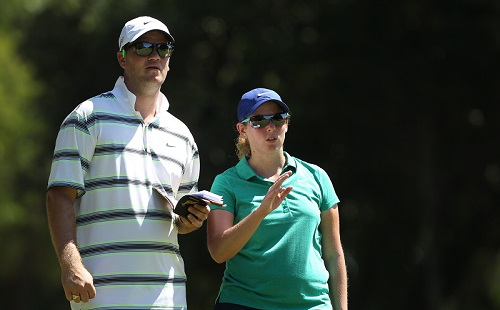 CAPE TOWN, 16 January 2017 – Ashleigh Simon needs no introduction. Her storied amateur career was nothing short of outstanding and, since she joined the pro ranks, she has complimented a flood of amateur victories with two Ladies European Tour and four Sunshine Ladies Tour titles.

All those feats belonged to Ashleigh Simon, though, so it’s no wonder that Mrs Ashleigh Buhai is so keen to kick off her fourth Sunshine Ladies Tour season in a big way this week.

“I’d better win and win quickly, or people will wonder what happened to me,” said the beaming newly-wed ahead of this week’s South African Women’s Masters.

The R500 000 event tees off at Rondebosch Golf Club on Thursday and she jetted into Cape Town with husband David on the bag, ready to put her game face on in the Mayor’s Pro-Am on Tuesday.

“We just got back from Australia, so I’m really pleased that we have the pro-am to play and an official practice round on Wednesday,” Buhai said.

“I haven’t played competitively since Dubai. We got in married in December, had the honeymoon and then went to a friend’s wedding in Melbourne. I need to get the rust off and get myself into competitive form quickly, because we have a few busy weeks ahead of us and I already missed the SuperSport Ladies Challenge.”

Buhai won four pro events as an amateur, including 2004 SA Women’s Open at the age of 14 and the SA Women’s Masters at age 16. She was the only amateur to achieve this feat in both flagship events and added a second SA Women’s Open title in 2007 just before she turned professional.

“I never had the chance to go for the double, because the last SA Women’s Masters was held in 2008 when I was campaigning in Europe,” Buhai said.

“It’s so awesome that we have this tournament back on the Sunshine Ladies Tour schedule. As amateurs we all dreamed of winning these two championships. Once I won them as an amateur, I’ve always wanted to own the double and this year I have the chance to win both. All of us have been saying the Chase to the Investec Cup for Ladies is a real race now because we have the SA Women’s Masters back.”

Buhai is under no illusions that it’s going to take her A-game to get her hands on the trophy again.

“We have a really strong field this week, what with our top players and a huge bunch of international competitors in the field,” she said.

“Lee-Anne (Pace) and Stacy (Bregman) are also starting this week. In the first event, Kim (Williams), Monique (Smit) and Melissa (Eaton) showed some great form and so did Ivanna (Samu). She led the first round of Cape Town Ladies Open as an amateur last year and she’ll be hungry to get her first pro win.

“Rebecca (Hudson) from England is back in title defence and she won on Sunshine Ladies Tour last year. Anne-Lise Caudal from France is a Ladies European Tour winner and always dangerous. But it’s the rest of the international players I don’t know that has me worried.

“I’m just keen as beans to get started and to see where my game is at. It’s going to be a fantastic week and Cape Town is always a great destination, even if the golf isn’t that good.”