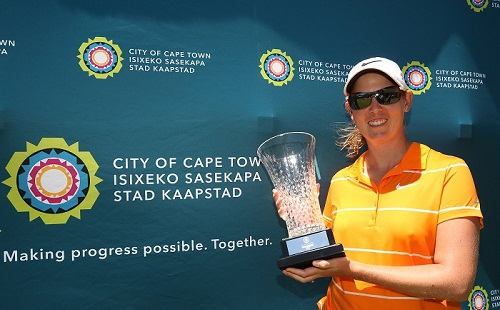 Converting three successive runner-up finishes to bank her first Sunshine Ladies Tour victory this season took a lot more work than Buhai imagined when she started the final day with a three shot edge over Pace.

Buhai led by one shot going up the last hole, but Pace drained a 12-footer for birdie and the top ranked pair deadlocked at eight-under-par 214 at the end of regulation play.

They returned to the 18th tee for another stab at the short par four and this time Buhai made the crucial move when she rocked home a 25-foot putt for birdie to seal the win.

“I nearly blew it,” said Buhai after she closed with a one-over-par 75. “I had a six shot lead through nine holes and then the wheels came off. I had a few bad swings and let a couple of putts slip by.” Buhai paid the price with three bogeys in a row at 13, 14 and 15 and when Pace birdied 14, the two shot swing left the pair at seven under with three holes to play.

“I was on the back foot, but my caddie said: “Let’s start again” so I regrouped,” said Buhai. “I hit a great three wood at 16 and nearly holed my chip. I made the birdie to go ahead again and I just had to trust myself that what I was doing was right.”

Buhai almost boxed another birdie putt at 17, but Pace also missed her birdie chance and Buhai still held a narrow lead on the first trip down the final hole.

“It was really tough to go for the pin at 18. The hole was playing downwind and the pin on 18 was tucked in right, so you had to carry a bunker if you went for it. I decided to play it safe and went with my five-wood. Lee-Anne had to go for it and she hit a cracking drive just short of the green and pitched it to 12 feet.

“I lagged the first putt to give and tapped in for par and it was up to Lee-Anne to force a tie. If you have the putt that distance, you want Lee-Anne to putt it, and I knew she would hole it.”

On the second trip down 18, Buhai said a cool head prevailed and she took the same approach.

“I played the hole exactly the same, but this time the putt didn’t miss,” she said “I am so pleased that I managed to restart and finish with a win. It’s been two years since my last victory, so it’s great to have that mojo back.

Buhai and her new bagman Johan Swanepoel leave for Australia on Saturday to compete in the LPGA Tour’s Australian Open. The will meet up with her former caddie, now husband David, who is on the bag for Pernille Lindberg from Sweden in the Oates Vic Open this week.

“The last three events was good, but I wasn’t really in it, but this week, starting as well as I did, I really wanted to finish it,” Buhai said. “I needed a really good week, because I won’t be playing the Dimension Data Pro-Am next week. This win takes me to the top of the Chase to the Investec Cup for Ladies, so I will still be in it when I get back from Australia.”

Three-time SA Women’s Open champion Pace may have seen a different outcome play out had her putter played ball.

“The greens were great, my putter not,” she said. “Throughout the three days I battled to get the ball into the hole and it cost me. Ash as the better player throughout and really deserves the title.”

Reigning SA Women’s Masters champion Carrie Park closed out the podium on five under with a joint-best low round of three-under 71.

Meanwhile Austrian-born Schaff added to her leading amateur achievement at the SA Women’s Masters when she led the amateur field at Royal Cape.