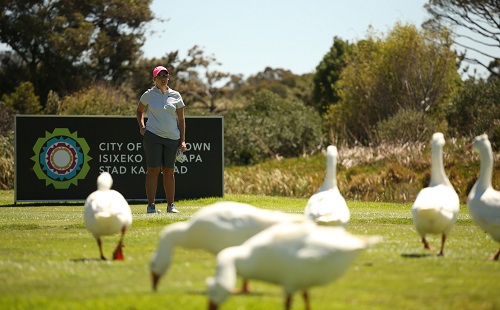 Ashleigh Buhai tightened her grip on the Cape Town Ladies Open, but the Glendower pro has defending champion Lee-Anne Pace snapping at her heels at Royal Cape Golf Club.

Buhai has been in brilliant form this season, carding three successive runner-up-finishes, and came flying out of the blocks in Tuesday’s opening round to establish a one shot lead at three under.

She was the picture of composure as she fired a flawless second round six-under-par 68 on Wednesday to close in on a fifth Sunshine Ladies Tour title.

“It’s not in the bag, yet, but it’s great to go out and play with some confidence against,” said Buhai after moving to nine under 139.

“I struggled to adapt to the new clubs after Nike pulled their equipment, but after working with my coach (Doug Wood) at the Tshwane Ladies Open, I handled them better and felt the improvement in the second and third rounds. This week I really feel comfortable and it’s showing in my scores.”

Buhai notched a pair of birdies at four and five. Three more gains after the turn took her to eight under and she picked up birdie number nine at the closing par four.

“I rolled in a lot of good putts and had two great par-saves at six and 13 that kept me going,” she said. “It was nice to finish with another birdie to put a little daylight between myself and Lee-Anne, because she will come out firing in the final round.”

Pace is chasing her 11th trophy finish on the Sunshine Ladies Tour after achieving a historic hat-trick in the SA Women’s Open two weeks ago.

After a mediocre even-par 74 start, the three-time Chase to the Investec Cup for Ladies champion came out guns blazing. She collected birdies at the second and third and added another brace of birdies at the fifth and sixth. A trio of gains from the 12th followed by four straight pars on the back nine for a 68 put Pace in sole second at six under.

“The only blip on my card was the bogey at seven where I didn’t up-and-down,” Pace said.

“I hoped to take advantage at the six par fives but I only managed to birdie three and I bogeyed seven, so things didn’t exactly go to plan. Overall, I’m pleased, though. I played really well tee to green and the putting was solid.

“I made a great par-save at 17, going from the trees into a bunker and onto the green and a solid par at the last to stay in touch with Ashleigh. If I can take advantage of the par fives and make a few more birdies tomorrow, I definitely believe I can catch her.”

The amateur lead belongs to Slovakian Laila Hrindova, who joined evergreen Laurette Maritz at five over after a 78. She leads by one from Chiara Contomathios, who returned a 79.