Buhai steady out the gates at British Women’s Open 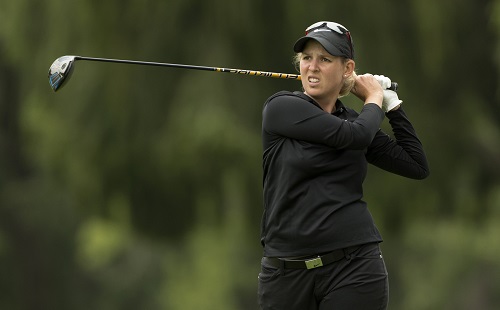 South Africa’s Ashleigh Buhai fired four birdies at the Kingsbarns Golf Links to finish within five shots of first round leader Michelle Wie, who grabbed the first round lead at the Ricoh Women’s British Open with a course record 64 on Thursday.

Buhai racked up gains at the second, fifth, 13th and 14th holes, but spoiled a flawless effort with a bogey at the par four closing hole for share of 21st at three under.

“I was steady from tee to green and played really nicely; just a pity about the bogey at 18,” said the reigning Chase to the Investec Cup for Ladies champion.

“I made a great up-and-down from the bunker at 12 to keep my round going and that set up the birdies at 13 and 14. It could have been a 68, but the drop at 18 wasn’t anything dramatic; just a soft bogey.

“I’m swinging it really well and I’m in a good position, so I just want to keep the momentum going.  Hopefully the weather will play its part.”

Buhai and Pace, who opened with a one over 73 to tie for 91st, both had the advantage of an early tee time and the gentle morning conditions, but Garcia, playing in the afternoon, had her round interrupted twice.

The 2017 Dimension Data Ladies Challenge winner had staked her claim on a spot in the season’s fourth Major by winning the last qualifying spot at St Andrews on Monday. “We were called off twice due to the threat of lightning and that really interrupted the flow,” said the Benoni golfer.

Garcia was able to offset some of the damage caused by a double bogey at the sixth and further drops at two, 10, 14 and 18 with back-to-back birdies at eight and nine and a further gain at the 12th for a three over 75.

“All in, we had a delay of an hour and about 20 minutes,” Garcia said. “It was challenging to get some rhythm going with the interruptions.

“Being three over and well down the leaderboard was not exactly what I envisaged for myself this week but hopefully I can take advantage of the good weather on Friday morning to make some birdies and give myself a chance to make the weekend.”

Former US Women’s Open champion Wie bogeyed her second hole, but followed with birdies on the fourth, sixth and eighth to go out in 34. She then stormed home in six under with gains at 11, 12, 14 and a trio of birdies over the closing holes.

END_OF_DOCUMENT_TOKEN_TO_BE_REPLACED

Sun PinkStig Series is a go!