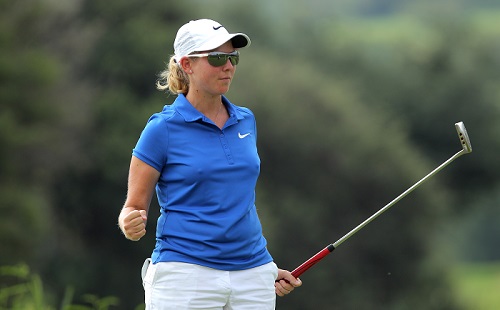 South Africa’s Ashleigh Buhai is brimming with confidence ahead of this week’s US Women’s Open after she sealed a career-best LPGA Tour finish in the Thornberry Creek LPGA Classic at Green Bay Golf Club in Oneida, Wisconsin on Sunday.

Buhai fired a seven-under-par 65 in the third round to vault to second and closed with a 67 to finish in second on 21 under 267, just one stroke shy of winner Katherine Kirk from Australia.

The reigning Chase to the Investec Cup for Ladies champion began the final round four off the pace, but while the Australian had an up-and-down day with four bogeys offset by six birdies, Buhai was flawless around Legends Championship Course. She racked up birdies at one, three, six and nine and ended a run of straight pars down the back nine with a two-footer for birdie at the last.

The runner-up finish was also her first career top-10 on the LPGA and her aggregate score was 14 shots better than her previous tournament record.

The 28-year-old from Edenvale was stoked by the result.

“It was awesome playing in the leading group for the first time,” Buhai said. “I started with a birdie and just tried to keep feeding off it. I relished the experience and I really enjoyed the support from the fans. It was a lot of fun out there.

“We both played great golf on the last day; both shot five under with no bogeys. At one stage we were tied for the lead, but unfortunately I had three lip-outs on the back nine. She hit two great shots on 16 and 18 to work it around trees and stay one shot clear. When I finally got it close on 18, but it was too little, too late. Hats off to her.”

One sensed that a big finish was coming when, early this year, the former amateur protégé started showing the kind of form that carried her to the winner’s circle twice on the Ladies European Tour and earned her three Sunshine Ladies Tour victories in 2014.

She won twice in February and beat top ranked Lee-Anne Pace for the 2017 Chase to the Investec Cup for Ladies title in March and when she returned in May, Buhai obliterated the opposition to win the Investec Royal Swazi Open for her seventh success on home. The resurgence in form also landed her a career-best tie for 36th in the season’s second Major – the KPMG Women’s PGA Championship – a week ago.

“I felt pretty calm throughout the whole week, which was nice,” said Buhai.

“When you are playing well that happens. When we drew level, I just knew I had to keep hitting the shots and making the putts to keep going and I did that. There’s not much else you can do. She dropped a few but she bounced back well. I got within close range, but it was a great birdie on 18 and you can’t argue with that.
“The week overall was fantastic. We had an easy drive up from Chicago. We had such good crowds, and the course was pure. Really low scores, but I think that’s what people enjoyed to see.”

Last month Buhai was among more than 1,600 hopefuls who contested in 25 sectional qualifiers around the world for a spot in the starting line-up of this year’s US Women’s Open. Buhai punched her ticket for Trump National Golf Club when she tied for the lead in her qualifier at Prestwick Country Club on 12 June.

Now she just wants to keep the momentum going.

“Obviously I’m delighted with my form and I want to keep it going for the US Women’s Open,” said Buhai. “Some weeks it’s just easy to do and other weeks, it’s not. It’s hard to explain. When you’re playing well and you can trust your swing, it’s very easy to keep pushing forward. That’s what I feel has happened in the last two weeks and I just need to keep pushing forward.”

Kirk also earned a spot in the field courtesy of her at Thornberry Creek to celebrate her 13th career appearance in this major championship and her first since 2015.