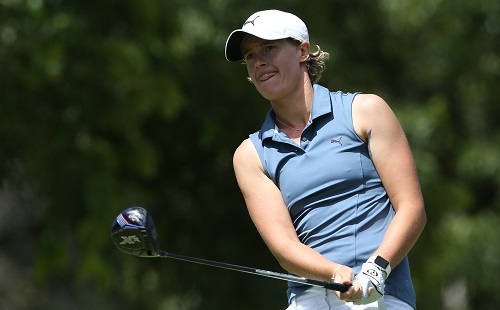 It was a case of South African delight and British cheer in equal measure as local favourite Monique Smit took control of the SuperSport Ladies Challenge, while Kim Williams and England’s Kiran Matharu moved within striking distance in Thursday’s second round at Huddle Park.

A tidy four-under-par 68 moved Smit – the winner of the inaugural event in 2014 – into pole position at seven under 137. She will start the final round with a three shot lead over fellow Sunshine Ladies Tour winner Kim Williams and she has four shots on the Englishwomen.

The co-leaders both parred the opening hole, but Smit left Strauss behind with successive birdies at the second and third holes.

The Southern Cape golfer overturned a bogey at nine with a birdie at the next and dipped to seven under when she holed her approach at the par four 11th. After covering a second blemish at the short 13th with a birdie at 16, she was visibly delighted to put some daylight between herself and the chasing pack.

“I had no expectations coming into the event because so much has changed for me since last season and I didn’t put in the practice I did in previous years,” said Smit. “The changes were positive and it’s reflecting in my game.

“Of course winning would set me up wonderfully for the two national championships (SA Women’s Masters and SA Women’s Open) in the next couple of weeks, but there is still work to do and I am not getting ahead of myself,” Smit said.

Williams is handily placed after a 70, while Matharu rocketed into third place with a best round of the day five-under-par 67.

“Both of them are experienced and could go low if the wind doesn’t blow on Friday,” Smit said. “They will keep me on my toes, for sure.”

Matharu was delighted to post the low round of the day and the Ladies European Tour campaigner hopes the 67 is a sign of things to come.

“It’s the first time that I’ve come out to play the Sunshine Ladies Tour and to get into contention in the first event is just fantastic,” said the Leeds native. “I didn’t play well in the first round, but we spend 22 hours in the air to come here and I think I was still tired.

“This was a much better reflection of my game, although I left at least three birdies there. I played better than my scores show and hopefully it all comes together on Friday.”

Meanwhile rookie Ivanna Samu cracked the top five in her debut and a second round 70 will see the 18-year-old former top ranked amateur start in joint fourth at two under.

Swaziland’s Nobuhle Dlamini grabbed a share of sixth with South Africans Tijana Kraljevic and Lejan Lewthwaite, but a second round 75 put a damper on joint first round leader Bertine Strauss’ birthday celebrations.

The defending champion just managed to edge inside the top 10 and is tied at even-par 144 with Chase to the Investec Cup for Ladies winner Nicole Garcia.