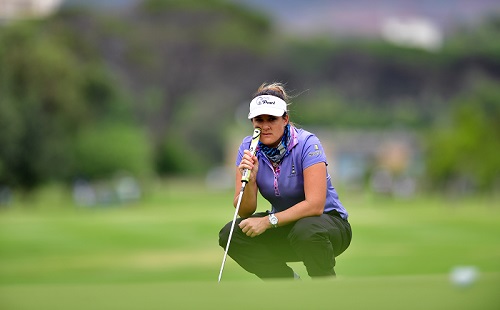 A fine three-under-par 69 saw Nicole Garcia move into a four-way tie for the lead with compatriot Ashleigh Buhai, South Korea’s Carrie Park and Kiran Matharu from England in the SA Women’s Masters on Thursday.

The Serengeti pro was delighted with her first round performance as the notorious Cape Doctor showed up in force at Rondebosch Golf Club.

“I’m from Ekurhuleni, so you can just imagine how tough it was for me in that 35 km wind, but now I have a bone to pick with Lee-Anne Pace,” said Garcia, as she watched South Africa’s top golf export birdie the 18th to finish one off the pace.

Garcia and former Protea all-rounder Jacques Kallis lost a friendly match to Pace and her caddie at the weekend and Pace’s condition for a re-match was that Garcia had to keep her company at the top of the leaderboard at this week’s R500 000 showpiece.

“I played out of my socks to get into the lead, so I think Jacques and I have earned that re-match, but she better step things up tomorrow,” jested Garcia.

Garcia stated that she had to depend heavily on her caddie, Ross Veenstra, the nephew of her boyfriend, Sunshine Tour pro Grant Veenstra.

“Ross was an absolute god-send in the wind,” she said. “At first it was tough to trust him when he told me to aim at a bush 50 metres right of the pin, but he read the wind perfectly. When I committed to the shot, it came out just right.

“The approach shots were the toughest, but the greens are in brilliant shape; they are fast and roll very true. I made four birdies and it could have been one or two shots better, but I’m pretty happy with a 69 to start with. I won’t mind too much if the wind blows some more, because today’s performance gave me a lot of positive energy.”

Budai also walked off the course with some confidence after birdies at 16 and 17 earned her a seat on the leaders’ bus.

“I never had the chance to try and win the SA Women’s Masters as a pro, so it’s been on my mind lately,” said Buhai, who was only 14 when she became the only amateur winner of the championship.

“I had a very long break for my wedding and honeymoon, so I was worried about my form. I always enjoy a challenging layout, though, and today positioning and execution was important. There is always room for improvement, but I’m pleased because this start gives me a fighting chance.”

Matharu was at her ball-striking best as she produced the only bogey-free round of the day.

She could have taken the outright lead, but her birdie attempt on the 18th green stayed above ground. After an indifferent start in the SuperSport Ladies Challenge a fortnight ago, the Ladies European Tour campaigner rallied to a third place finish in her Sunshine Ladies Tour debut and she was pleased to get off to a fast start in her second appearance of 2017.

“It’s great to put myself in a good position on the first day,” Matharu said. “I left a couple of short putts out there, but this is a much better reflection of my game. I had just 27 putts, so I’m putting a lot better, too, this week.

“The weather caught me off-guard, though. There wasn’t any rain in the forecast, so I arrived without a rain suit or an umbrella, but it let up pretty quickly. I’m used to the wind, though, because I played a lot of golf in Scotland growing up.”

Matharu’s highlight of her round was a splendid sand-save at 13.

“I hit it into the trees and I had no shot, so I punched out and finished in the sand trap,” she said. “I had a 45-foot bunker shot, which is the hardest in golf, and I hit it to about six foot. That was the best save I made all day.”

Park relocated to South Africa at the age of 13 and played most of her amateur golf for Gauteng North until she turned pro at the end of 2014. The 19-year-old held the number one position on the country’s amateur rankings for more than a year, so teeing it up on the local circuit is no hard-ship for the Seoul golfer.

Having paid her rookie dues on the Sunshine Ladies Tour last year, she would love nothing more than lifted the trophy on Saturday.

“I don’t like to think too far ahead, but I would love to lift this trophy or the SA Women’s Open trophy,” said Park, who erased two early drops with five gains. “It’s like the SA Women’s Amateur and SA Women’s Stroke in amateur golf; it’s the most prestigious titles, so you want your name on the trophy.

“Plus winning this week gives the champion a huge boost in the Chase to the Investec Cup, so there is a lot to play for in the next two days.”

END_OF_DOCUMENT_TOKEN_TO_BE_REPLACED

Hudson has designs on English double