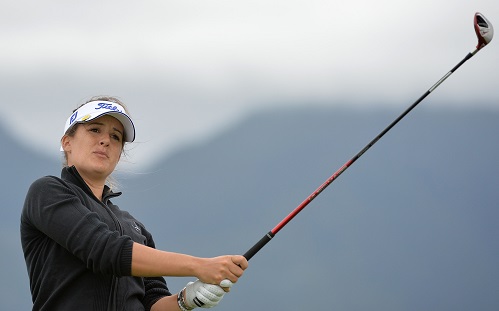 South Africa’s Nicole Garcia pulled within two shots of Lydia Hall from Wales and Finland’s Noora Tamminen, who set the first round target in the Qatar Ladies Open at five under with a pair of flawless 67s in Wednesday.

Kylie Walker from Scotland and Anna Nordqvist from Sweden finished a stroke further back, while Garcia secured a share of fifth with nine players by posting a three-under-par 69.

The Ebotse golfer made the most of the great weather conditions to reel in five birdies on the way home.

“I started off a little rough with three-putt bogeys at the first and the ninth and turned two over,” said Garcia. “I made back-to-back birdies at 10 and 11 and picked up two more at 14 and 15.

“I gave a shot back to the field when I didn’t birdie the very driveable par four 16th, but I birdied 18, which is a lay-up par five. I struck the ball really well and the course suits my game.

“I don’t do well with grain, so the putting was a little erratic, but hopefully I’ll get my eye in as the tournament progresses.”

Fellow Sunshine Ladies Tour campaigner and two-time Ladies European Tour winner Ashleigh Simon grabbed a share of 15 with a 70, while former Spanish Open champion Connie Chen eagled the 10th and aced the par five 13th on her way to a 71 that was good enough for a share of 22nd.

Compatriot Stacy Bregman finished a little lower down the leaderboard in joint 52nd after carding a 73 and amateur Madeleen Grosskopf returned an 88.

Meanwhile Hall and Tamminen, who were both waylaid with injuries last year, clearly enjoyed being back to form.

“It was really solid out there today. I only missed one green and got my putter going throughout the middle part of the round, so I’m playing well,” Hall said. “I’ve been playing well all year really, after the knee injury last year. I came back with a fresh set of eyes. I’ve been focusing on playing rather than on technical things.”

Tamminen, who represented Finland in the Olympic Games in August, is targeting a maiden victory.

“I felt really confident and calm this morning,” she said. “My long game was super good and I hit all the greens. I had some bad drives but they weren’t that bad, so it was a steady round. I just want to enjoy the game and have no pressure. I really like playing in the Middle East. Everything is well organised and I love that we have Abu Dhabi and this one. I really like the course and that you have to be good from the tee.”