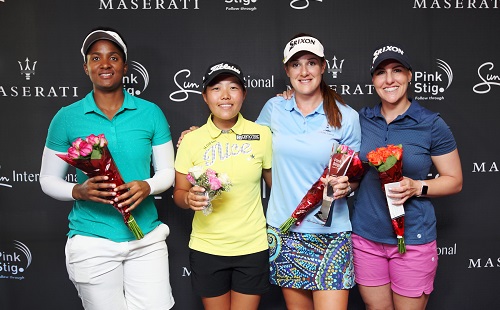 Nicole Garcia – a regular on the European and Sunshine Ladies Tour – started day two at the Sun PinkStig Series at Parkview Golf Club with a two-shot lead over Nobuhle Dlamini of Swaziland, while duo Ivanna Samu and Tandi McCallum remained in striking distance.

Although Nobuhle shot the lowest round on the final day with a 69, Nicole was able to hold her play together, making two birdies in her last three holes.

Nicole pointed out that at the start of her round she could not make the birdies, but her experience from playing abroad taught her to play through and wait for the birdies to come.

Well, that’s what happened as she came into the closing stretch of her round. She was satisfied with her performance and attributed her success at the end of the day to regularly playing in various competition abroad.

Melissa Eaton did not have the best start to the series, shooting 76 in round one, but fought back and with home course advantage, finished with a 70 to clinch third position.

Tandi on the other hand was in contention with a 73 after round one, and looked likely to make top three, but she was unable to compliment her final round leaving one too many putts short of the hole.
Ivanna, who was striking the ball well on both days, battled on the greens to make par.

Her attempts to attack the flag left her with some lengthy par putts. Ivanna is one of the most exciting players currently on tour and definitely caught the attention of the spectators. She shot 73 and 76 respectively and managed to stay ahead of Kim Williams to finish in fourth position.
Kim, who has in recent months been in great form, just could not get the driver going. She shot a conservative 77 and followed it with a 74 to seal off the top five positions in the Sun PinkStig Series.

Woo -Ju Son was the first placed amateur followed by Cassandra Hall in second and Catherine Lau in third position.

Woo Ju, the country’s top ranked junior, has been playing golf from the age of five and already reeled in eight titles on the national amateur circuit this season, as well as the amateur trophy in the SA Women’s Open. She is definitely a talent on the rise.

At the prize giving Barbara Pestana from the WPGA congratulated UniMedia for its innovation and creation of the PinkStig brand of women’s professional golf.

“Women’s pro golf can only get stronger with more competition at home,” Pestana said. “It’s the only way we will produce players with an appetite to play competitively and be comfortable with winning.”
Zahira Hansa CEO UniMedia highlighted at the prize giving that UniMedia has forged new and exciting partnerships to make the game more attractive and interactive both online and on and off the course.

“It is with this fresh impetus that the PinkStig brand appeals to the millennial minds, which sets the pace for continued collaborations and growth in women’s golf,” Hansa said.

The Sun Pinkstig Series finale will be held at Sun City from the 4th to 6th December with a purse of R250 000.

Written and released by UniMedia. For more information, please visit www.unimediaweb.net and www.pinkstig.com

END_OF_DOCUMENT_TOKEN_TO_BE_REPLACED

Sun PinkStig Series is a go!