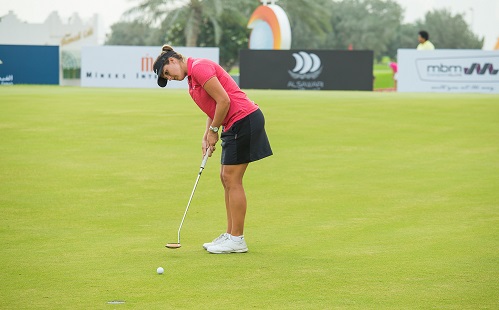 South Africa’s Nicole Garcia will start the final round of the Qatar Ladies Open hoping to crack a top 10 finish in the Ladies European Tour season-finale at Doha Golf Club in Qatar.

The Sunshine Ladies Tour champion was well inside the top 10 after an opening round of 69 and second round 70, but a one under 71 on Saturday saw her slip to joint 12th on six under 210.

“It’s all or nothing on Saturday,” said Garcia. “I simply must produce a solid performance in the final round to secure my card for 2017. I’m lying in 86 position at the moment and I must break the top 80 to avoid a trip back to Q-School. It’s a lot of pressure, but if I can just get the putter to cooperate in the final round, I know I can do it.

“The wind picked up and complicated matters, but the course was definitely still score-able. I also parred the 16th again, which was really frustrating, because it’s such a short birdie hole. The rough also proved a little tougher for me. I battled to predict how the ball would come out so I didn’t get any of my chip shots close.

“But I am striking the ball really well, which gives me a lot of confidence tackling the final round of the season. I’m hoping that it will call come together and I can finish the season with a strong performance.”

Garcia will start her final round six shots off the pace from co-leaders Aditi Ashok from India and Nanna Koerstz Madsen from Denmark.

The Indian teenager is targeting back-to-back victories following her maiden win at the Hero Women’s Indian Open a fortnight ago, while young gun Madsen is also hunting a second Ladies European Tour title after claiming her first win at the Tipsport Golf Masters in Pilsen in June.

Fellow South Africans Stacy Bregman, Ashleigh Simon and Connie Chen all sit at two under 214 at the 54-hole mark after posting respective rounds of 70, 74 and 75 on Friday.