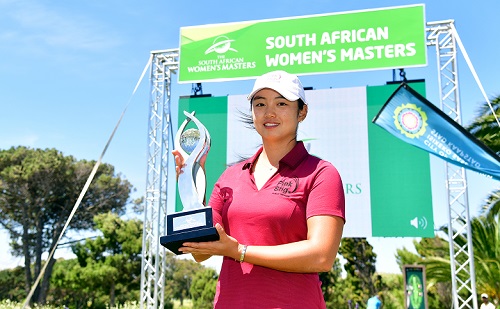 Carrie Park from South Korea rubber-stamped her status as a future world beater when she clinched her first Sunshine Ladies Tour title in spectacular fashion in the South African Women’s Masters on Saturday.

The 19-year-old held her nerve to construct a mature even-par 72 on a day of wind and drama at Rondebosch Golf Club as the expected charge from veteran pros Lee-Anne Pace and Ashleigh Buhai never got off the ground.

The petite Park was the picture of calm as she started her title bid with a two shot lead over Buhai and Pace a further shot back. That cool exterior slipped for the first time after she tapped in for par at the final hole to capture a five stroke victory over Buhai and England’s Kiran Matharu on a winning score of seven-under-par 209.

Not only did Park pocket the biggest pay cheque – worth R70 000 – of her short career, but victory in the R500 000 showpiece rocketed her to the top of the 2017 Chase to the Investec Cup for Ladies.

“I can’t believe I’ve done it; this is amazing,” gushed Park.

“I know how experienced Lee-Anne and Ashleigh are and I knew a two shot lead wouldn’t be much if they started firing, so I just tried to stay inside the zone and keep everything else out of my head. I had a few scary moments out there, but I kept it together and I am so proud that I didn’t fall apart on myself. I’m on top of the world right now.”

It wasn’t all smooth sailing for Park, who has lived in South Africa since 2009 and calls herself ‘Proudly South African’.

She interupted straight pars over the first six holes with a birdie at the fourth, but surrendered her first shot of the day at the seventh. Level for the day at the turn, she caught a bad break as she started the back nine with a four shot lead.

“My tee shot rolled just off the fairway into a patchy area,” she said. “I took a few practice swings, and on the third swing, I saw the ball move about an inch, so I had to call a penalty on myself.

“I finished the hole with a bogey and dropped another shot at 12 and suddenly, Ashleigh, Lee-Anne, Kiran and Nicole (Garcia) were breathing down my neck.”

Her pursuers battled to find some traction to narrow the gap in the gusting wind and Park was back in control with a birdie at 13. At 15, she made a superb par save and chipped for another birdie at 16.

“The wind pushed my call in the left greenside bunker at 15,” said Park. “The ball was few inches from the edge and behind the ball there was a hole in the sand. The ball was below my feet and I had little room to move, but I told myself just to try to get it on the green and try to save par. I hit a great shot and I holed a long left to right putt for par. That gave me a boost for the last three holes.”

Park took a conservative approach at the last two holes to protect her lead.

“I didn’t want to risk anything on the last two holes, but I lagged it close at the 18th and it felt so good to have the tap-in left for par to seal the win,” she said.

“I’m taking a lot of confidence to the SA Women’s Open and I like the course because it suits my game, but it’s too early to talk about back-to-back victories. I’ve made a great start to the Chase to the Investec Cup for Ladies and hopefully I can build on that next week, because I really want to play for that R1-million again at the end of the season.”

Buhai and Matharu tied for second on two under after respective rounds of 73 and 75 and Garcia moved into fourth on one under with a 74. Pace signed for a 76 for a share of sixth with recent SuperSport Ladies Challenge champion Kim Williams, who closed with a 72.

Western Province amateur Katia Shaff won the Sally Little Trophy as the leading amateur. The Austrian-born player rallied with successive rounds of 73 after opening with an 81 to grab a share of  19th on 227.