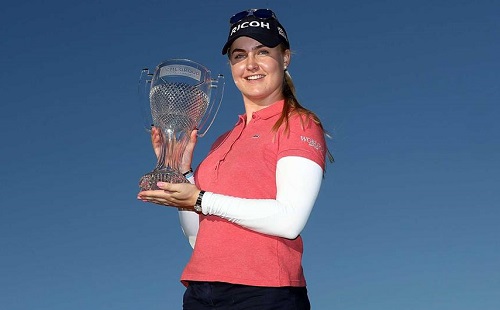 England’s Charley Hull won her first LPGA title, Ariya Jutanugarn from Thailand took home the Player of the Year Award and a cool $1-million, while South Korea’s In Gee Chun birdied the 72nd hole in the CME Group Tour Championship to clinch the Vare Trophy on Sunday.

South Africa’s Lee-Anne Pace skipped the season-finale, but finished the 2016 with a career-high ranking of 35th on the LPGA Tour Money List. Compatriot Paula Reto finished 62nd at the Tiburon Golf Club in Naples, Florida and sealed a 61st place finish in the Race to the CME Globe Standings and a 72nd place ranking in the Money List.

Here is how world number one Lydia Ko walked away empty-handed as the curtain came down on the 2016 LPGA season on Sunday.

After a series of close calls, including a runner-up earlier this year at the ANA Inspiration, Britain’s Hull captured the CME Group Tour Championship by two shots from So-Yeon Ryu for her first LPGA win.

Up one to start the day, Hull and Ryu were tied at 19 under going to the par-five 17th. When Ryu’s approach to the 17th green wound up under the lip of the bunker and resulted in a bogey-six, Hull pulled two ahead with a two-putt birdie. The 20-year-old holed a routine par at the last to post a closing 66 to triumph on 19 under par.

While Ko got off to a poor start from which she couldn’t fully recover, Jutanugarn bounced back from two early bogeys to turn at even par and added three birdies on the back to shoot 69 and edge out Ko for the top spot in the Race to the CME Globe standings.

The only thing that could have stopped Jutanugarn from taking home the Rolex Player of the Year award was a victory by Ko, but the Kiwi’s hopes were dashed by a front-nine 39. The award, along with a $-1 million cheque brought a superb season to a fitting close for the five-time LPGA Tour winner and Women’s British Open champion.

Playing together in the same group, Chun and Ko went head to head Sunday for the Vare Trophy Award for the low scoring average in 2016. Chun came out on top with an average of 69.583 to Ko’s 69.596.

After Chun made birdie and Ko bogeyed the par-five 17th, the pair went to the 18th hole with Ko leading by one one-thousandth of a point. This meant the season-long award for scoring average would come down to one stroke on the final hole of the year. However, Ko missed her birdie attempt and Chun boxed a nine-footer to clinch the Vare with a birdie-birdie-birdie finish.

Ironically, Ko was in position to win the tournament, the CME Globe’s $1 million jackpot, the Player of the Year Award and the Vare Trophy through the first 36 holes, but 36 holes later, she left Tiburon with nothing.

She threw away her chance at the tournament and Player of the Year award when she bogeyed the third and dropped two shots at the ninth to slip to eight under.  Four birdies between the 10th and 16th got her back in the hunt for the $1 million against Jutanugarn, but the bogey at 17 dashed all hope and also narrowed her scoring-average lead over Chun to the difference of one stroke on the final hole. Although the found the fairway and hit a quality approach into the 18th green, her birdie try stayed right of the hole, ceding the stage and the Vare to Chun.