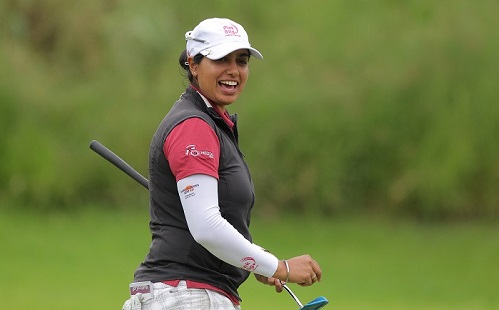 The most engrossing season since the Sunshine Ladies Tour launched in 2014 is heading for a dramatic conclusion in this week’s Chase to the Investec Cup for Ladies Final as England’s Kiran Matharu aims to finish as the tour’s number one player for 2017.

The 27-year-old former golf prodigy nearly gave up the game at the end of 2015 after being plagued with injury problems. After being diagnosed with locked hips, Matharu decided to give it one more shot.

Her decision to come out to South Africa at the start of the season and compete on the local circuit paid off in ways the Leeds golfer could not imagine. Matharu earned a maiden Sunshine Ladies Tour victory in the Ladies Tshwane Open and remarkably consistent form in her eight other starts elevated her to the top spot in the Points race.

“This has been a great experience for me, because consistency has been key to my results,” said Matharu. “I’ve not started well in some of the events, but I improve during the tournament and score really well in the last two rounds. In fact, even when I haven’t played my best I still scored well, which was probably the biggest difference.

“I’m just really looking forward to finishing the season on a high note and taking this confidence to Europe. The next few days are going to be exciting times.”

Matharu tops the Chase to the Investec Cup for Ladies rankings with 2 019 points, but when the showstopper at Millvale Private Retreat tees off on Friday, there are at least four players that could collect the winner’s share of 1 000 points to edge out the leader in the season-finale.

Ashleigh Buhai – a mere 200 points behind her – is Matharu’s main challenger.

Buhai and Matharu have played together a few times and enjoy a friendly rivalry, which has buoyed both players to incredible golf as the season comes to a close.

“It’s great to have a bit of rivalry on the course,” said Buhai. “Everything we’ve worked for this season boils down to being here this week and trying to win the Chase to the Investec Cup for Ladies.

“I had a shaky start to the season when I had to switch to new clubs and to make the top 10 and have a real stab at the title is a dream come true. You can play golf until you’re really old, but these are the moments you are going to remember at the end of your career. We have the best of the best here at Millvale and we will be pushing each other to another level this week.”

Dimension Data Ladies Challenge winner Nicole Garcia – third with 1 689 points – believes the tête-à-tête at the summit has pushed everyone to greater heights, but now the focus is on the grand prize.

“I’d like to finish the season on a high before I leave for the start of the Ladies European Tour,” said the 24-year-old Benoni golfer. “I’m definitely going to Europe at a different level than I was starting last season. This season as has given me a lot of confidence and I am a lot more prepared.

Kim Williams captured the season-opening SuperSport Ladies Challenge and the Centurion Country Club player bookended a superb season with a five stroke victory in the Joburg Ladies Open in Tuesday.

The victory rocketed Williams to fourth in the rankings with 1 645 points, but she leads by a slender 100 points from the other player in with a shot of winning the Chase to the Investec Cup for Ladies – fifth ranked Carrie Park from South Korea, who made her professional breakthrough in the SA Women’s Masters in January.

Three-time Chase to the Investec Cup for Ladies winner Lee-Anne Pace, ranked sixth, arrived back from the HSBC Women’s Champions on Wednesday and discovered the head of her driver had snapped off during the flight from Singapore.

Although she is effectively out of the chase for the main prize on 1 280 points, the Investec Property player quickly had three drivers fashioned from odd heads and shafts, because there is still the matter of the R100 000 winner-takes-all prize.

“There is always something to play for, and although I can’t win the Chase but I can still win the Chase to the Investec Cup for Ladies Final,” said South Africa’s top golf export. “And that’s the goal.”

The four players ranked below Pace who will also be gunning for the tournament win are Tandi von Ruben (1 253), Namibian golfer Bonita Bredenhann (1 096), debutant Lejan Lewthwaite (987) and Swaziland’s Nobuhle Dlamini with 957 points.

“Everything here at Millvale is absolutely pristine,” Dlamini said. “Every tee box, every fairway and every green is just perfect and the recent rain has turned it all green and lush. I drove every fairway and green in the practice round and I am hungry. I can’t wait to get started.”