Matharu holds all the cards at Ladies Tshwane Open 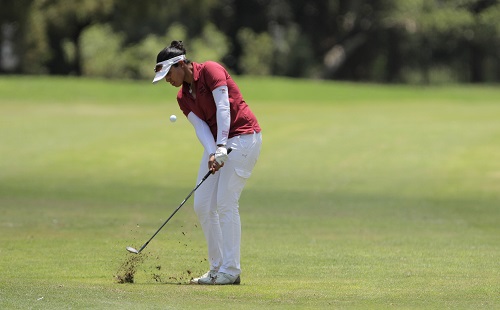 For a second time in three weeks, its advantage to a foreign campaigner as Britain’s Kiran Matharu continued to stamp her dominance on the Ladies Tshwane Open at Zwartkop Country Club on Wednesday.

Targeting a breakthrough on the Sunshine Ladies Tour after a third, a second and a fifth place finish in her first three starts, the 27-year-old from Leeds opened up healthy three stroke lead with a second round two under 69 to top the scoreboard at five under 137.

Matharu believes she has the game to see it through, but she will keep an eye on Kim Williams and Ashleigh Buhai leading the chasing pack.

Williams soared into contention with a four under 68 that included five birdies on the homeward loop and she finished at two under, one shot ahead of Buhai.

The former Ladies European Tour winner tied for second with Matharu at the SA Women’s Masters and locked down a runner-up finish in last week’s SA Women’s Open. Buhai rocketed into third after shooting a 66 for the low round of the day.

Matharu hopes to get the putter working early to extend her advantage on the final day.

“I started off a bit slow, dropped a shot at the second but got I quickly got a birdie back at the fourth and on the back nine I made two birdies in a row, but I had a lot of birdie chances that I didn’t convert,” she said.

“In the first three tournaments I let myself down with poor second rounds. That’s when you need to move upwards to have a chance. That’s what I’ve done today, so tomorrow, I just need to get the ball to the hole, that’s all. I’ll stick to the same approach and play hole by hole, shot for shot.

“That’s the best way to win, keeping it simple. I don’t think about winning or prize money or the Chase to the Investec Cup for Ladies points when I’m out there, because it detracts your focus. There are a lot of good players on my heels, so I have to stay in the moment.”

Williams won the season-opening SuperSport Ladies Challenge and was equally pleased to have shot at victory.

“The rough is really thick, so keeping the ball on the short stuff will be key to giving yourself chances to score,” she said. “I’d love to get my hands on another trophy, but we’ll have to go low to catch Kiran, because she’s a quality player.”

It’s a tall order to catch the Englishwoman when you are four back, but Simon is primed to give it a shot. “I was really happy with my five under,” Simon said. “I worked a few things out on the range with Doug (Wood), my coach, and it definitely paid off.  If I can do what I did today and keep that feeling going, I could be in with a shout.”

Top ranked Lee-Anne Pace will start the final round six shots behind the leader in a tie for seventh with Monja Richards and Mae Cornforth after rounds of 71 and 72.

END_OF_DOCUMENT_TOKEN_TO_BE_REPLACED

Masterful Matharu on the march in Tshwane