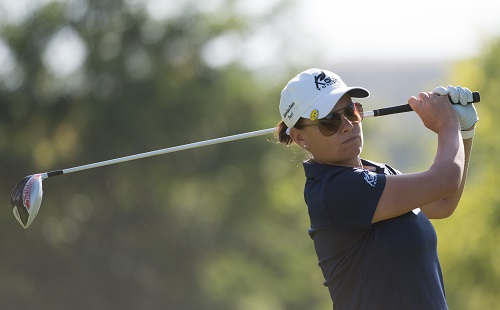 PATTAYA, Thailand (26 February 2017) – South Africa’s Lee-Anne Pace rebounded with an eagle and two birdies in the final round as Amy Yang weaved her way to tournament record winning total of 22-under-par 266 in the Honda LPGA Thailand on Sunday.

The South-Korean fired a four-under-par 68 in the weather-interrupted event at the Siam Country Club to triumph by five strokes over compatriot So Yeon Ryu.

The previous tournament record of 21 under was held by Suzann Pettersen in 2007 and Ai Miyazato in 2010.

“I am beyond happy,” said Yang, who had to play 31 holes on Saturday and 23 on Sunday. “I had so many early wakeup calls this week and I had to stay patient out there.”

Pace took a two week break from the Sunshine Tour to start her 2017 LPGA Tour season in Thailand, opened with successive rounds of two under 70. A third round 73 at the Pattaya Old Course saw the LPGA Tour winner head into the final round at three under.

She moved to four under with a birdie at the par four second, but gave the shot back at four. The three-time Chase to the Investec Cup for Ladies champion picked up a second birdie at the sixth, but a double bogey at the short eighth hole saw her turn at two under.

Pace was level for the tournament with four holes to play after further drops followed at 12 and 14, but a chip-in eagle at the par four 15th gave her some much-needed momentum down the homestretch. She boxed a solid putt at 17 to gain a shot and holed another at 18 for a birdie-birdie finish for a 71 that moved her to four under 284 and joint 32nd overall.

A final round 68 secured third for South Korea’s Sei Young Kim on 15 under, while Lexi Thompson posted the low round of the day – a 67 – to tie for fourth with fellow American Danielle Kang, who shot 68. The pair finished nine strokes behind Yang.

The tournament featured 18 of the top 20 players in the world, including top-ranked Lydia Ko from New Zealand, who closed with a 68 and finished 11 shots off the pace in joint eighth.

Pace follows the LPGA Tour to Singapore this week for the $1,5-million HSBC Women’s Champions at the Sentosa Golf Club’s Tanjong Course before she returns to complete in the Chase to the Investec Cup for Ladies penultimate event, the Ladies Joburg Open at Royal Johannesburg & Kensington.

END_OF_DOCUMENT_TOKEN_TO_BE_REPLACED

Play-off perfection from Park at Glendower