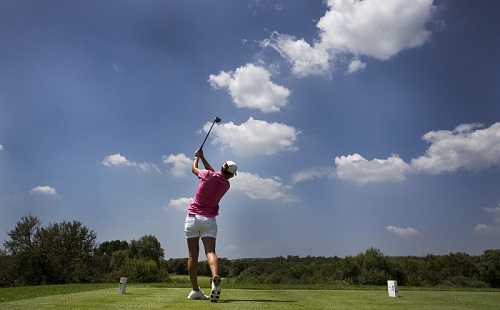 4 November 2017 – It’s not only the South Africans in the Turkish Airlines Open battling balky putters. After two sizzling rounds of 66, the short stick bailed on Lee Pace in the third round of the Fatima Bint Mubarak Ladies Open in Abu Dhabi on Friday.

The nine-time Ladies European Tour winner made a promising start at the Saadiyat Beach Golf Club with a birdie at the first, but she only managed to guide the ball into the hole for a second again after 12 straight pars.

Bogeys at the par four 15th and par four 18th saw Pace close out an even-par 72 and the three-time Chase to the Investec Cup for Ladies winner will start the final round three behind Aditi Ashok.

The Indian golfer started moving day one off the pace, but as the temperature soared to the mid-thirties, Ashok caught fire and raced past Pace with six birdies on the front nine. The 2016 Rookie of the Year returned a superb 68 to blast to top the pile at 15-under-par 201.

“I was hitting it well on the range and I had a feeling that I could have a few birdie chances,” said Aditi, who won back-to-back titles at last year’s Indian and Qatar Opens.

“It started out well and I was five-under on the front nine but there were a couple of mistakes on the back which could have been avoided. Four-under is still good. It’s good that I have a two-stroke lead but there are several players within two or three shots and a low round is very possible on this course so I’ll need to play well tomorrow.”

Pace is one shot behind Cheyenne Woods from the United States of America, who also posted a 68 and shares third with England’s Ellie Givens, who fired a flawless eight-under 64.

“I felt very frustrated because the ball striking was as good as always, but the putter ran cold and I left myself in bad positions a couple of times,” she said. “I had a lot of down-hill putts and short-sided myself because they were not easy putts to make.

“The decision-making wasn’t the best either, especially when I overshot the green at 18 and dropped another shot. But if I can make a quick start on Saturday, I could still get there.”

Like Pace, compatriots Nicole Garcia and Ashleigh Buhai also had a tough day at the office on the putting greens.

Pace had 30 putts, but Garcia needed 32 and Buhai 33 to match her 72. Garcia will start the final round in joint 25th at six under and 2017 Chase to the Investec Cup champion Buhai will be looking to improve on her tie for 45th at two under.