Pace under pressure in Cape Town 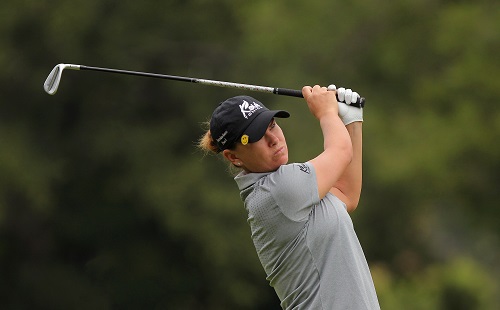 A changing of the guard has left Lee-Anne Pace under some pressure as she prepares to start her title defence in the Cape Town Ladies Open on Tuesday.

South Africa’s top golf export sealed a hat-trick of wins in SA Women’s Open two weeks ago, but Pace elected to miss the season-opening SuperSport Ladies Challenge and she performed below her usual standard in her other two starts in January.

The victory at San Lameer followed a joint fifth finish at the SA Women’s Masters at Rondebosch Golf Club. A tie for eighth in the Ladies Tshwane Open at Zwartkop Country Club last Thursday moved Pace to sixth in the 2017 standings and the Paarl golfer will start the R200 000 event at Royal Cape Golf Club on the back foot.

England’s Kiran Matharu shot to the top of the standings courtesy of a maiden breakthrough in the Ladies Tshwane Open last Thursday. The Leeds golfer tops the standings at 1 270 points and between Matharu and Pace there is a 610 points difference and four players – Ashleigh Buhai, Carrie Park, Kim Williams and Nicole Garcia – to overcome.

Since Pace is due to defend her title in the Sunshine Ladies Tour Dimension Data Challenge in George next week before she heads to Thailand, then Singapore to compete on the LPGA Tour, it will become increasingly tough for her to bag a fourth successive Chase to the Investec Cup for Ladies title if she doesn’t snatch the 250 points on offer for the Cape Town Ladies Open winner this week.

Pace won every event she started since the Sunshine Ladies Tour launched in 2014, but her winning run ended in the Investec Cup for Ladies Final last year.

“When the Sunshine Ladies Tour launched in 2014, players like Lee-Anne, Ashleigh, Monique Smit and myself dominated a relatively young circuit, but that started changing with Bertine’s run of victories last year,” Bregman said.

“The Sunshine Ladies Tour has grown so much in the last two years and we are seeing a lot more depth on the circuit. A lot of amateurs have transitioned into the pro ranks with good results and the international support for the tour is also higher.

“The younger players were intimidated by our international status back in 2014, but they’ve played against us for three years. They have matured and gained experience and now they compete against us on equal footing, which has raised the standard on the tour significantly. It’s not surprising to see new champions like Carrie Park and Kiran emerging.”

Williams, who kicked off the 2017 season with a welcome return to the winner’s circle at the SuperSport Ladies Challenge, identifies with Pace.

“Having come up pitifully short of making the final last year, I know the kind of pressure she is under, but Lee-Anne is a class act and tour de force, as she showed at the SA Women’s Open, so I don’t doubt that she will make the top 10,” Williams said.

“But the competition is definitely tougher this year. Many of the younger players are showing the confidence and experience they have gained in the last three seasons. They still admire the top ranked players, but they are no longer in awe of them. I think it’s great that these youngsters are rattling the cages, because this is how we continue to grow the tour.”

The Cape Town Ladies Open will be played over 54 holes from 7-9 February at Royal Cape Golf Club. Entry is free for spectators, there is ample parking available and clubhouse facilities are open for the public.