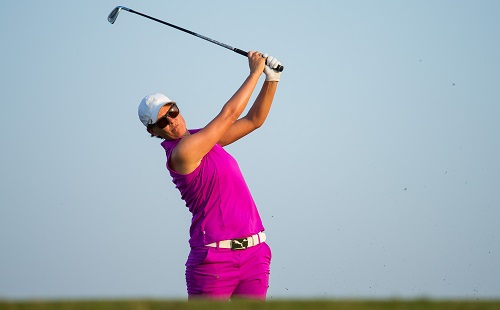 Another sublime 18 holes from Lee-Anne Pace kept the South African atop of the leaderboard as the sun set on the second round of the Fatima Bint Mubarak Ladies Open in Abu Dhabi on Thursday.

The overnight leader moved to 12 under and has a one shot cushion over India’s Aditi Ashok, who stayed in the hunt with a 66 at Saadiyat Beach Golf Club.

Luna Sobron from Spain shot a new course record 62 to finish three strokes off the pace in joint third alongside Sweden’s Camilla Lennarth and Cheyenne Woods, who holed out at the sixth for her first ace since joining the pro ranks.

Pace had a run of seven straight pars before she racked up five birdies on the trot. The nine-time Ladies European Tour winner kept a clean card all the way to the final hole, where she popped in her sixth birdie of the day.

“It feels great and I remembered the course better today but I struck the ball really nicely too’” said the three-time Chase to the Investec Cup for Ladies champion.

“I hit the shots I wanted to hit and I hit it really close to the pin and made the putts. Tomorrow I’d like to start the way I did today, and be a bit patient, as patience helps you to do a lot. I had some chances which I didn’t take but in the end I’m pretty satisfied.”

Compatriot Nicole Garcia mixed five birdies with a lone bogey at the par four fifth for a four-under-par 68. The 2017 Dimension Data Ladies Challenge winner sits at six under in a tie for 14th, six shots behind Pace.

Reigning Chase to the Investec Cup for Ladies champion Ashleigh Buhai returned a 70 to move to joint 44th at two under, but Stacy Bregman missed the cut – set at 143 – by three shots after posting successive rounds of 73.