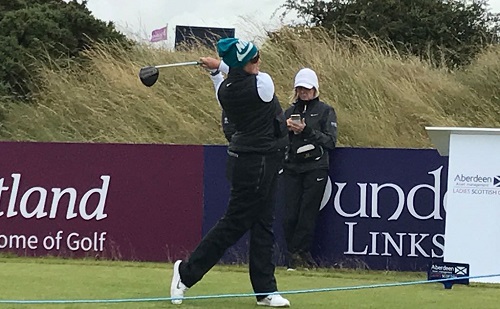 The five South Africans campaigning in the Aberdeen Asset Management Ladies Scottish Open made a battling start in blustery conditions on opening day as Australian Karrie Webb defied the squall to fire a stunning seven-under-par 65 at the Dundonald Links in North Ayrshire to take the lead on Thursday.

Former world number one Christie Kerr shot 66 in the morning when the wind was raging at 40 km per hour, but 42-year-old Webb bettered the target by one shot when she racked up five birdies in a row from the 11th to leapfrog the American for the lead.

Ashleigh Buhai made the best start among the South African challengers with a two over 74.

The reigning Chase to the Investec Cup for Ladies champion was four over after a double bogey at the opening par four 10th and further drops at 11 and 12.

The 28-year-old Sunshine Ladies Tour winner birdied the par five 18th to turn three under and reclaimed another shot with birdie at the par four first. Although she dropped another shot at the fourth, a last gain at the eighth helped Buhai to a tie for 55th.

The rest of the local challengers are in danger of missing the weekend, though.

Lee-Anne Pace made five bogeys on her way to a 77, Stacy Bregman pencilled in a lone birdie at the second to go with a double bogey at the third and five further drops for a 78 and Nicole Garcia also added five bogeys to a double at the par four eighth.

Compatriot Paula Reto’s colourful 81 included a lone birdie at the 18th, a double bogey at 13, a triple bogey at 17 and three successive drops from the third hole.