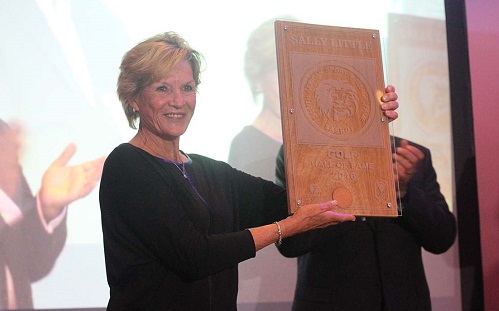 Little became the first South African golfer inducted into the SA Hall of Fame, which has its new home at Sun City, and her memorable achievement was celebrated during the PinkStig Invitational prize giving in the Warrior Hall of the Sun International Convention Centre at Sun City.

“I am proudly South African, always have been and always will be and this is an incredibly special moment for me,” Little said. “To be inducted in the South African Hall of Fame here in my home country after these years means the absolute world to me.”

Little won a slew of amateur titles, including the SA Women’s Match Play and Stroke titles before the age of 18. When the SA Golf Hall of Famer finished fifth in her first professional event, the Lady Carling Open, she decided to ply her craft on the LPGA Tour shortly after she was named the South African Sportsman of the Year in 1970.

She made an immediate impression, qualifying for LPGA Tour status in just seven events and was rewarded at the end of her first season with the LPGA Tour Rookie of the Year award.

In 1976, she holed a 75 foot bunker shot at the final hole of the Women’s International to celebrate her maiden win with a one shot victory. She amassed 12 titles between 1979 and 1982, including her first major title at the 1980 LPGA Championship.

Consistently ranked in the top five in the world over the next 10 years, Little added the Du Maurier to her Major titles and pushed her tally on the LPGA Tour to 15 victories. Her supremacy was even evident even here in South Africa when she scored a runaway victory in the inaugural SA Women’s Masters in 1996.

South Africa boasts seven male Major winners, but by and large Little remains the country’s most successful female golfer. It was this accomplishment that earned Little a spot among country’s top sport stars in the South African Hall of Fame.

“Our mantra is celebrate, inspire and empower and we strive to tell the stories of extraordinary achievers,” said SA Hall of Fame chairperson, Johnny Burger.

“We celebrate the holistic accomplishments of the individual and not only their talent, skill and successes. Through this we strive to inspire individuals to dream, and to reach their full potential which, in turn, puts them in the position to make a difference in South Africa.

“We aspire to excellence on all fronts and to be authentic and true to oneself. This will pave the way for a content human being and to leaving a legacy.”

Little has collaborated with Unimedia Pro, Sun International and PinkStig to raise awareness for women’s golf in South Africa this year while promoting her book Capturing the fire.

The season long tour culminated in the PinkStig Invitational, which served as the curtain-raiser to Little’s SA Hall of Fame induction and the R100,000 one day event drew 22 Sunshine Ladies Tour campaigners, including former Ladies European Tour player Von Ruben.

The Randpark pro captured the first Sun International Ladies Challenge title at the Lost City when the Sunshine Ladies Tour launched in 2014. She also mounted a strong challenge at the same course during the Chase to the Investec Cup for Ladies in 2014 and 2015, so it came as no surprise that Von Ruben clinched the stylish trophy on nine points in the Modified Stableford format.

PHOTO – Sally Little holding her SA Hall of Fame plaque; credit Unipro Media / PinkStig
With thanks to Unimedia Pro for the quotes from Johnny Burger.

END_OF_DOCUMENT_TOKEN_TO_BE_REPLACED

Strauss set for sizzling start to 2017