SA pair through to PGA weekend 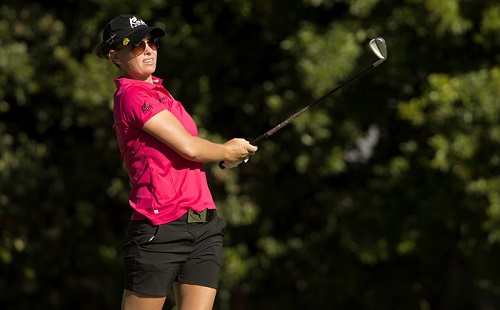 South Africa’s Ashleigh Buhai and Lee-Anne Pace will start today’s third round of the KPMG Women’s PGA Championship at one under par and six shots off the pace from American Danielle Kang and Sei Young Kim from Korea.

Buhai posted rounds of 70 and 71, while Pace followed an opening 72 with a two under 69 to join the reigning Chase to the Investec Cup for Ladies champion in a tie for 35th in the weather-hit Major at the Olympia Fields Country Club in Illinois.

Round one was suspended due to dangerous weather and the second round also had to be halted until lightning strikes had past.

Kim and Kang have shot identical scores of 69-66 through 36 holes, and they were both in fine form Friday as they carded six and five birdies, respectively.

At the halfway mark, the pair share the lead at seven under with a pack of five players including Jodi Ewart Shadoff from England, American Brittany Lincicome and South Korean trio Chella Choi, Amy Yang and Mi Hyang Lee lingering one shot back.

Brooke Henderson from Canada, So Yeon Ryu from Korea, Australian Sarah Jane Smith and Moriya Jutanugarn from Thailand are a further shot adrift.

Kim and Kang can’t afford to ignore Henderson, who beat former world number one Lydia Ko in a play-off for her first Major title last year.

Rounds of 68 and 69 has moved the defending champion into prime position to capture back-to-back wins after she came out on top at the Meijer LPGA Classic last month.

And spare a thought for Kelly Shon.

The American began the second round in a tie for 126th place following an opening round of 77, but she throttled her way into red numbers and joint 27th with an eight-under-par 63 that included an eagle on the par-five 18th.

Written and released by Lali Stander on behalf of the Sunshine Ladies Tour and the WPGA.