Strauss set for sizzling start to 2017 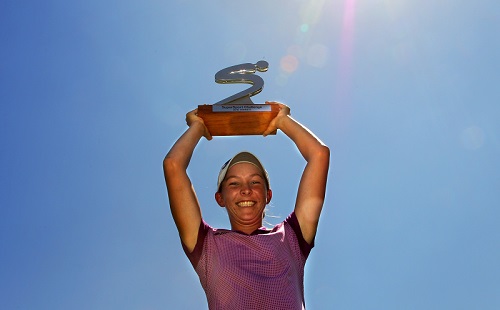 Bertine Strauss will be gunning for a fourth straight Sunshine Ladies Tour victory when she starts her title defence in the SuperSport Ladies Challenge on Wednesday.

This this time around, though, the petite Koster golfer says she is not feeling any pressure.

“It’s a different ballgame this year,” said the second season professional after her practice round at Huddle Park Golf Club on Tuesday.

“Last year I had limited starts with my LPGA Tour Q-School card, so any time I got a spot, I had to jump on a plane. That meant less time for the Sunshine Ladies Tour, which put me under major pressure to make the Chase to the Investec Cup for Ladies Final. This year I’ll have the full season to make the grade, so the pressure is off.”

Although Strauss took second in the Ladies Joburg Open and joint seventh in the Cape Town Ladies Open last year, missing several events left her well out of position to make the Top 10 for the R1-million season-finale.

Coming back from the Australian Women’s Open, but she was under the gun with only two events remaining, but she had to hit the ground running in the Sun International Ladies Challenge. After claiming a maiden win at Sun City, she showed supreme composure and mental fortitude to capture a wire-to-wire victory in the SuperSport Ladies Challenge.

Back-to-back victories vaulted her to fifth in the Chase to the Investec Cup for Ladies Points Standings and, buoyed by the double success, Strauss powered to a third consecutive podium finish at Millvale Private Retreat.

“It’s all a bit of a blur now,” jested Strauss ahead of the season-opening event. “I didn’t have time to think. Luckily it all worked out, but it’s great not to have that kind of pressure this season.

Of course, Strauss will have to hold off a heady line up headed by South African powerhouse Lee-Anne Pace, who sealed her third Chase to the Investec Cup for Ladies title last March.

“And don’t forget last year’s rookies Carrie (Park) and Lejan (Lewthwaite), who made a strong case for maiden victories,” Strauss said. It’s definitely not going to be a cake walk.

“The course is fantastic because they have had some nice rain in the area. The course is a lot greener this year and quite a bit softer. We’re all going to have to get the rust off after the festive season, so I’ll just have to get as competitive as possible, as quickly as possible and hope I beat everyone to the punch.”

The SuperSport Ladies Challenge launches the fourth season of the Sunshine Ladies Tour, comprising nine events totalling nearly R3-million in prize money and culminating in the mega R1-million bonus pool season-finale Chase to the Investec Cup for Ladies Final for the top 10 ranked professionals from 10-12 March.