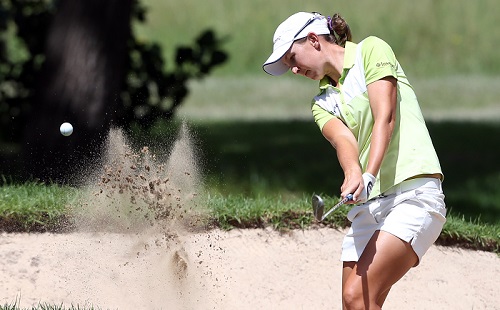 The Investec Property player admits that she is not enjoying the kind of form that helped her to three successive victories in her rookie season last year. However, vivid memories of last year’s come-from-behind win at Sun City has put her in a positive frame of mind.

“My game is not where I want it to be yet,” said Strauss.

“I began struggling with my swing on the LPGA Tour last year. I’d fix a problem, but create another. It was a catch-24 and all I really did was put Band-Aids on the problems. I needed to get it sorted out before I head back to the USA and I’ve been working with Hendrik Buhrmann for a few weeks now.

“It’s a process and it’s going to take time, so I need to stay patient and grind through this. Yes, it’s frustrating, but the problems didn’t happen overnight and there isn’t an overnight fix. I haven’t played to the standards I’d like to yet, but I see the progress and that’s a step in the right direction.

“I’m going to try my best to defend the title. My goal would be to get off to a good start to give myself a chance coming down the home stretch in the final round, but the Lost City is a different type of course. It can definitely throw up a surprise winner.”

Strauss believes her strongest competition will come from Chase to the Investec Cup for Ladies leader Kiran Matharu and Carrie Park, a two-time winner this season.

Matharu has been in blistering form this season.

Her only finish outside the top 10 in seven starts was in the Cape Town Ladies Open three weeks ago, where she teed it up with a new set of clubs and tied for 13th. Since then, the Englishwoman finished fourth in the Dimension Data Ladies Challenge and tied for third in last week’s Sunshine Ladies Tour Classic sponsored by Canon.

“Kiran has definitely been one of the most consistent players this season,” said Strauss. “She just doesn’t go away. She also hits it very straight, which is key to playing this course. If she gets stuck in here at Lost City, she will be gunning for a second title come Thursday.

“Carrie won the SA Women’s Masters and beat Nobuhle Dlamini in a four-hole play-off at Glendower last week. She has been in contention almost every week. The strongest part of her game is her short game and, with course really wet, she will shoot darts at the flags and give her putter a work-out.”

“There are a bunch of girls who could go low this week, because this is more of a resort course and the greens are significantly slower than the ones we’ve played this season,” she said.

“Nicole Garcia played superbly in George, Nobby was in sublime form last week and she led going into the last round here at Sun City last year. She’ll be in a very positive head-space going into this week. But really, the list could go on and on.

“If you look at the top 10 finishers at Glendower last week, the two new girls (Valentine Derrey from France and Kylie Henry from Scotland) played really well in their Sunshine Ladies Tour debut at a wet and tough Glendower. Kim Williams already won this season and she is in dangerous form and Ivanna Samu is really starting to find her feet in the pro ranks.

“And you can never discount Ashleigh Buhai or Stacy Bregman. In fact, Stace won at Lost City two years ago. She’s also been working on swing changes with her new coach and if she starts running hot, she’ll be tough to beat.”

The Koster golfer recalls the winning memories vividly of her triumph last year and will be drawing on those positive memories as she start’s Tuesday’s first round.

“I was under the gun to make the Chase to the Investec Cup for Ladies when I came back from Australia last year,” she said. “Only a top two finish would have guaranteed my spot in the top 10 and I shot two under in the final round to win. That sparked a great run for me and won the SuperSport Ladies Challenge a week later and the final at Millvale.

“All those memories came flooding back when I arrived at Sun City and I’m eager to start. I’m lying 14th in the current Points Standings, so I’m pretty much where I was last year. I need a win or at least a top three finish put myself in the race with the Ladies Joburg Open to come.”