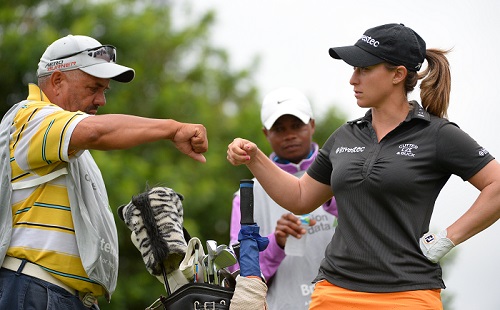 The Sunshine Tour and Sunshine Ladies Tour sponsors and partners have set the cat among the pigeons with a momentous prize money hike for the Ladies Joburg Open, which tees off at Royal Johannesburg and Kensington Golf Club from 5-7 March.

The dust barely settled on Darren Fichardt’s tremendous triumph in the Joburg Open when an increased purse of R500 000 for the penultimate event on the 2017 Sunshine Ladies Tour was announced on Thursday.

After an enthralling season spanning over eight events, the battle for the top 10 spots in the season-finale is heading for a thrilling climax as the Sunshine Ladies Tour reaches the business end of this year’s Chase to the Investec Cup for Ladies.

With 5 000 points to play for and 650 valuable points up for grabs for the winner, the huge escalation was music to the ears for Stacy Bregman and Bertine Strauss.

Both Investec Property players are working on swing changes and have been struggling to recapture the winning form that carried Bregman to the winner’s circle four times and earned Strauss three successive victories in her rookie season last year.

“In the past three years, the top 10 players that would contest the R1-million bonus pool at the Chase to the Investec Cup for Ladies Final was pretty much decided by the time we reached the last three or four events.

“Now the race has been thrown wide open right at the tail-end of the season. This is huge news for players like myself, Bertine and the others who on the bubble. This means that all the players currently ranked in the top 16 realistically have a shot at making it to the Final.”

City of Joburg Executive Mayor, Councillor Herman Mashaba, is delighted with the support for the Ladies Joburg Open and hopes the event enjoys just as much excitement as Joburg Open.

“We applaud the Sunshine Tour and Sunshine Ladies Tour partners and sponsors for their vision to lift the Ladies Joburg Open to show-stopping status,” Councillor Mashaba said.

“With new champions emerging this season, this year’s points race is incredibly tight. The Ladies Joburg Open is now the most competitive event of the season and the bumper prize money has added renewed drama as we build towards an exciting climax to the 2017 Chase to the Investec Cup for Ladies.”

“Raising the purse to R500 000 means that our players are competing for more than R4.1-million this season,” Nathan said.

“That is four times the prize money on offer when we launched in 2014 and truly emphasises the incredible support that the Sunshine Ladies Tour has enjoyed from its sponsors in the last four years.”