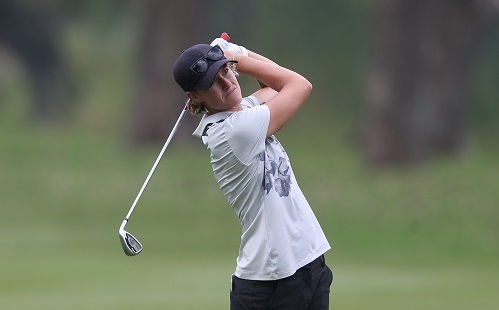 Monique Smit claimed the first round lead in the Joburg Ladies Open with a superb five-under-par 67, while Lejan Lewthwaite’s campaign to make field for the Chase to the Investec Cup for Ladies Final began with a solid four under 68 at Royal Johannesburg & Kensington Golf Club on Sunday.

Smit – a three time winner on the Sunshine Ladies Tour – has battled with inconsistency this season after dropping a staggering 20kg in the last 10 months.

“For once, it all came together,” said a delighted Smit. She hemmed in a bogey at the second with a brace of birdies and capitalised on a good start to add further gains at 14, two and six before she finished in impressive fashion with a birdie at the par fourth ninth.

The 26-year-old Fancourt golfer currently ranks ninth in the Chase to the Investec Cup for Ladies Points Standing and was pleased with a solid start in the R500 000 final counting event.

“I started the week under the gun, because I have to protect my top 10 spot, but I tried to push the Final and Millvale to the back of my mind,” Smit said.

“It’s been a frustrating season so far. I’ve had a lot of highs and lows, because I’ve had to make a lot of adjustments. I stand over a shot and think I can’t hit that, but that was last year. Most of it has been mental, because my mind is still catching up to my new body shape.

“Today’s first round was just about committing to every shot. I wanted to finish among the leaders, but I didn’t set my expectations to high. I struck the ball well and I putted really well, despite the really wet conditions out there.

“The bogey was silly. I had 130 metres and I took nine-iron and hit it with everything I had, only to end up in the bunker. I have to say, we were worried when we saw the state of the course on Friday after all the rain, but the Sunshine Ladies Tour staff did an amazing job with the course set-up and the staff here at RJK did an amazing job to get the course ready for us. There is still a lot of wet patches in the landing areas, but at least we can get short irons and wedges into the greens to give ourselves a chance to put a decent score on the board.”

Lewthwaite, 12th in the current standings, needs a top five finish this week to break into the top 10.

The 26-year-old overcame a double bogey at 11 (her second hole) and turned one under, birdied one but dropped four and then collected birdies at five, six and eight for a 68.

Englishwoman Lauren Taylor held the outright lead at three under through 13 holes. The Ladies European Tour player bogeyed 14, but birdies at 16 and 18 helped Taylor to joint second at four under with Lewthwaite.

“I put it in the bunker, splashed out and hit a great chip to eight feet and holed the putt to get to four-under” said the 22-year-old from Rugby. “It was great fun to play with Nicole (Garcia). I’m staying with her out here in South Africa and we egged each other on. It was tough to watch her bogey three holes after the turn, but she made a stunning eagle at the 18th to finish at two under.”

Buhai dropped three shots in her opening loop and turned one over, but she rebounded with three successive birdies from the third and another gain at the eighth to finish at three under.

“I started bogey-birdie, bogey-birdie and I dropped another shot at 17,” said Buhai. “I told my caddie we needed make some birdies. I did it and got myself back in the mix. That’s all you could ask for, because there is a lot of really strong players behind us.”

END_OF_DOCUMENT_TOKEN_TO_BE_REPLACED

Buhai mounting charge for the top