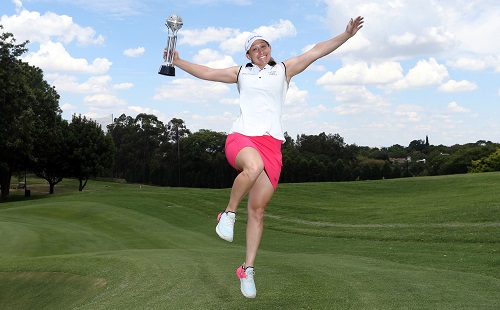 The Country Club Johannesburg golfer carded a final round one-under-par 71 to triumph by four shots over Ashleigh Buhai in the R400 000 season-opener.

The victory ended a two-year title wait for the 31-year-old, who won the Zambia Ladies Open in 2014 and racked up three titles in 2015.

“It’s the best feeling ever, said Bregman. Those first two days felt easy, although the conditions were challenging and it felt really great to start the last round in the lead. It’s been a long while.

The last year was such a difficult season. I felt I was heading for a breakthrough. I tasted it a few times, but it just didn’t happen. When I came home at the end of the season, I sat down and really analysed what Stacy wants for the future.
I have a great team around me and I’m excited for the future after this win. I feel like I’ve turned a big corner and I’m hungry for more success. It feels incredibly good to lift a trophy again and to start the year in the winner’s circle is a dream start to the season.

A double bogey start gave Buhai and Du Toit an early chance to close the gap, but both her opponents squandered the change to put pressure on the leader. Ash and Danielle both dropped at the first and I told my caddie Dougie (Mthembu) that was our last bogey for the day, said Bregman.

She found birdies at key times and gains at four, five and seven took her through the turn at four-under with a three shot lead over Buhai and a four shot cushion on the amateur.

That gave me breathing space and I had the momentum down the back, said the 31-year-old Investec Property player. Ash and Danielle kept the pressure up with some birdies on the back nine and I gave them another chance to close to the gap at 15.

I didn’t hit a good tee shot and left myself with a lot of fairway to cover to the green. I managed to miss the hazard with my second, but I finished short of the green in the really thick stuff. It was a tough chip to a tiny green and a difficult pin, but I got it inside 10 feet and just missed the par putt. It was a good bogey, though, and I took some confidence from making it.

Then Bregman hammered home a 30-footer for birdie at 16 and that was the money shot. She rattled in par putts at 17 and 18 to drive home the victory.

I hit a 9-iron into 16 and had a long look at the putt, said the Country Club Johannesburg golfer. The moment the putt dropped I felt I had it in the bag, but I never took my eye off the ball. The best two shots of the day was my approach at the fourth and the putt at 16.

Both holes were key turning points in the round where I thought ‘right, I’ve got this’. I just stuck to the processes that Grant (Veenstra/coach) have set for me as hard as I could. It felt great walking up 18 knowing I was going to win again. I just hope this ride continues.

Buhai closed with a 73 to finish on even-par 216, one shot ahead of 11-time Sunshine Ladies Tour winner Lee-Anne Pace, who also registered 73.

Although Du Toit battled some on the back nine, she gave an excellent account of herself at her home course to close out a top 10 and clinch the Top Amateur honour on four-over 220.

END_OF_DOCUMENT_TOKEN_TO_BE_REPLACED

Bregman remains the player to catch in Tshwane