Bregman remains the player to catch in Tshwane 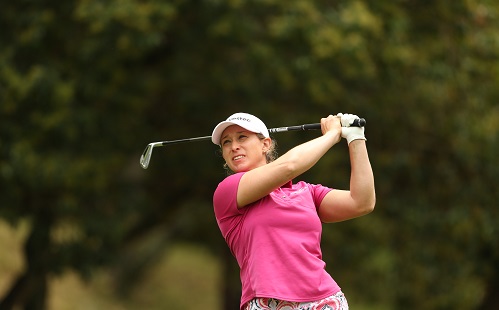 Play was delayed by two-and-a-half hours after a deluge of more than 30 mm left the bunkers and greens at Pretoria Country Club water-logged, but Bregman took the suspension in her stride. She fired three birdies on the front nine and countered two bogeys coming home with a late birdie at the 16th for a one-under-par 71.

This secured the Country Club Johannesburg golfer a two shot lead heading into the final round, but she will have to hold off two hungry adversaries to seal a trophy finish.

Buhai, who is hunting an eighth Sunshine Ladies Tour title, also returned a round of 70. Not since Buhai won her second South African Women’s Open title in 2007 has an amateur triumphed on the local professional circuit.

Du Toit stunned the professional field with a three-under 69 at her home course.

The 18-year-old Du Toit will be counting on her home course advantage to produce a grand stand finish in front of the home crowd.

I’m really excited to play with Stacy and Ashleigh, because that was the goal I set myself this week, said the 2017 All-India Ladies Amateur champion. I hoped to get into contention and I’ve done it.

It’s such a great honour for our club to host the Sunshine Ladies Tour and for me to be playing in this event. My goal was to try to play with our top players so I can learn from them and I’m just bursting with excitement to start the final round with two of my idols.

Bregman was less animated, but just as eager to see what the final round would bring.

I really played nicely today, despite the delayed start and a couple of bogeys on the back nine, said the Investec Property player. I hit the ball well and my irons into the greens were really good, too. I just lost a little rhythm down the stretch but I settled and played some great shots coming home.

I definitely back myself for the final round, but Ashleigh has come off her best season yet, and she is always a strong contender over the last 18 holes. I only met Danielle today. I think it’s great that she will have this opportunity. It’s her home course, so there is a lot of pressure there, but I think she will have a great time playing with us.

Lee-Anne shot 71 and Carrie 69, so they both made positive moves and they will definitely be chasing me down the last nine holes, said Bregman. They are all capable of going low, especially if the weather is good and we get some run on the ball. All I can do is play my own game and see where I finish up.

Meanwhile Leslie Grandet from Madagascar one of the 26 international campaigners in the season-opening event recorded the first ace of the season when she holed out at the par-three eighth.