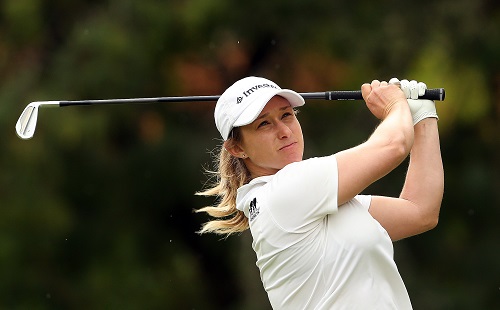 Stacy Bregman birdied the final hole at Pretoria Country Club for a gutsy one-under-par 71 to lead the home charge on a windy first day in the Canon Ladies Tshwane Open on Tuesday.

The severity of the gusts proved challenging for the 78-strong field on day one, but the four-time Sunshine Ladies Tour winner Bregman fired six birdies to produce the only sub-par round on the tightly-packed leaderboard.

Six more players are within striking distance at two-over.

Bregman overcame a shaky start and pushed to the front with birdies at 12 and 14 and she offset a late bogey at the par three 16th with the birdie finish.

I hit some good shots, but my course management was off at the start of the round and I think I was a little over-excited to get going, she said.

I made two good birdie putts at six and seven to reel it back and that settled me down. I think I deserve a little pat on the back for finishing under par, because it definitely wasn’t easy out there. You constantly had to adjust your clubs to the wind, which was very gusty.

Bregman switched coaches at the end of last year. She worked hard on her game in the off-season to iron out her swing and is pleased with the progress she’s made.

I joined Nicole Garcia at the Grant Veenstra Academy at Ebotse and I’m really happy with all the work Grant and I have done, she said. I could see the improvements and it’s really great to see the swing changes pay off.

Bregman enjoyed four victories in 2016 and she is keen to return to the winner’s circle.

Playing this course is like playing a chess game; you really have to plan your shots and execute them well, said the Investec Property player.

It’s a tight layout, with a lot of trees and 80-plus pot bunkers to navigate. I think course management is key to scoring well. I was slightly rusty on the front nine, but my course management was much better over the last nine holes.

The greens are small, so you’re not putting from great distances, even if you hit it to the middle. But you have to keep it in play and avoid those pot bunkers to have a chance to win.