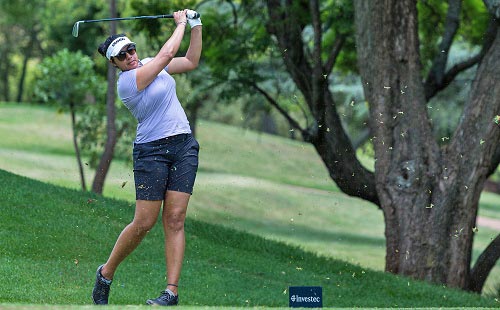 Kiran Matharu has set herself a couple of lofty goals as she starts her second season on the Sunshine Ladies Tour with her title defence in the Canon Ladies Tshwane Open this week.

The English golfer spearheads a 27-strong international challenge that will battle the local line-up in the season-opening event of 2018 at Pretoria Country Club from 23-25 January.

Last year was such a great experience and I am incredibly excited to be back, Matharu said. We played at some of the most stunning courses in South Africa. It’s fantastic to leave the snow behind and start the season in sunny weather.

I nearly gave it all up at the end of 2015, said the former golf prodigy from Leeds. I was in constant pain and no-one knew why. I was ready to throw the towel in when I was finally diagnosed with locked hips. After months of intensive rehabilitation, I decided to give it one more shot.

Her decision to compete on the local circuit paid off in ways Matharu could not imagine.

She pronounced herself with a magnificent wire-to-wire victory in the Ladies Tshwane Open at Zwartkop Country Club and shot to the top of the Chase to the Investec Cup for Ladies Points Race with five further top three finishes. However, she had to settle for the second place cut of the R1-million bonus pool after Ashleigh Buhai won the season-long chase with a runner-up finish in the final event at Millvale.

Matharu is relishing the chance to go up against South Africa’s top talents again.

It was brilliant to be in contention week after week and to play against top calibre players like Ashleigh, Lee-Anne (Pace), Stacy (Bregman) and Nicole (Garcia) last year, she said.

My first season surpassed all my expectations and I’ve set the bar quite high this year. The top priorities are a strong start in the Canon Tshwane Ladies Open to set the momentum for the season and, of course, the Investec South African Women’s Open.

There are so many great things about the Sunshine Ladies Tour this year. With some of the sponsors throwing in together, like Canon South Africa and the City of Tshwane this week, the schedule is more compact and it offers great prize money. It’s in the perfect slot at the start of the season for players like me who didn’t get into the events in Australia, LET Access Series players and the ones who missed out at qualifying school.

We head back to Europe tournament ready after seven highly competitive events, so it’s a no-brainer, especially if you add the Investec South African Women’s Open into the mix.

Matharu expects tough opposition from the leading South African players, who will also be keen to get a foot on the Investec Property Fund Order of Merit ladder over the first two events.

Lee-Anne won her Ladies Tshwane Open title here at Pretoria Country Club and I’ve been told that Ashleigh won the SA Women’s Amateur Stroke Play and Match Play here, so they will both be feeling positive. Carrie Park from South Korea is also back. She won the SA Women’s Masters and the Sunshine Ladies Tour Classic, sponsored by Canon, last year and she will have gained a lot of experience on the Ladies PGA Tour in Korea.

I can only control what I do. I’ll take it shot-by-shot and see where I am at heading down the back nine on Thursday. If I’m in the mix, I will push really hard. It would be great to win the first one; it really sets you up for the rest of the tour.