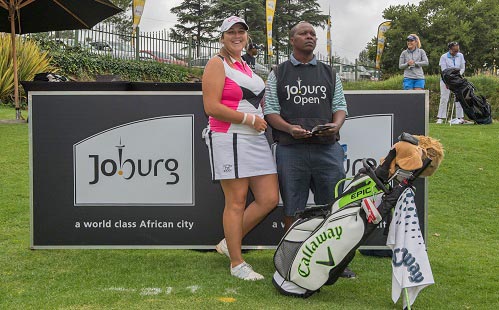 South Africa’s Ivanna Samu hopes to use her extensive knowledge of Modderfontein Golf Club as a springboard for success when the Joburg Ladies Open gets underway on Wednesday.

A top five finish in last week’s Canon Ladies Tshwane Open after a month-long injury lay-off was just the shot in the arm the second-season professional needed as she targets a Sunshine Ladies Tour breakthrough in the R500 000 City of Joburg showpiece.

“I aggravated an old wrist injury in early December and I only started practicing after the BMW SA Open,” said the statuesque 19-year-old Ruimsig Country Club golfer.

“I was really anxious and had shocking back nines in the first and second rounds for 76 and 74, but I took control in the final round. Shooting three-under in the last round brought all the confidence back.”

She had a proper spring in her step when she arrived at Modderfontein for Tuesday’s Pro-Am.

“The moment I saw that the Joburg Ladies Open was coming to Modderfontein this year, I was raring to go,” said Samu. “I know this course like the back of my hand, and it’s great to be back.

“I played nearly all my junior golf here; in fact, ask any kid who came through the junior ranks at Gauteng and they will tell you that this is their other ‘home course’. The memories came flooding back when I walked into the clubhouse and I am flush with positive vibes.”

Samu held the number one ranking as an amateur for almost two years and, predictably, was the leading amateur at the end of the 2016 Sunshine Ladies Tour season. She made her pro debut last year, but the reality of the paid ranks was a big wake-up call.

“The transition to the paid ranks was mentally really tough,” said Samu, who signed a deal with Callaway on Monday to become the first female pro to represent the brand in South Africa.

“When you dominate on the amateur circuit, you get comfortable. When I was preparing for my Sunshine Ladies Tour debut on the IGT Challenge Tour, I began to realise how big the gap really is. That first season was a huge eye-opener, from playing at home to going to the First Stage of the LPGA Tour Qualifying School.”

Samu believes testing the water in the United States gave her the perspective to succeed.

“When I played the Sunshine Ladies Tour as an amateur, I played with a lot of freedom and did really well,” she said. “In my first pro season, I should have played the courses; instead I played for my sponsors, my parents, family and friends. I wanted to run before I could walk.

“America taught me that I still have a long road ahead of me and that playing for money comes with a whole set of headaches. What I learned was that the journey to the LPGA Tour is a series of steps and only the exceptional few skip ahead.

“Ultimately I know where I want to end up. To get on the LPGA Tour, I have to earn my stripes. I got some stripes on the IGT Challenge Tour and the Pink Stig Series last year, and I’m earning more stripes on the Sunshine Ladies Tour this season. But just maybe, I can land a trophy along the way.”

A total of 81 players will start the 54-hole Joburg Ladies Open, including 29 local and 31 international professionals plus 21 amateurs, led by the country’s number one ranked junior Woo-Ju Son.