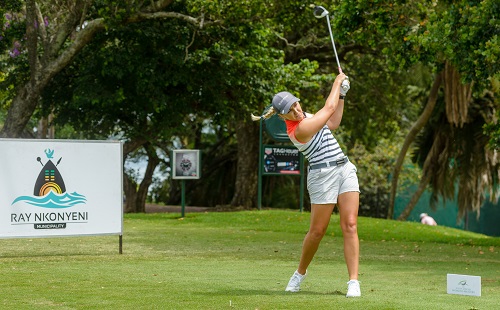 Most of the attention ahead of this week’s South African Women’s Masters has been on Investec Property Fund Order of Merit leader Stacy Bregman, but watch out for young professionals Lejan Lewthwaite and Lora Assad when the fifth Sunshine Ladies Tour event tees off at San Lameer Country Club on the KwaZulu-Natal south coast this Thursday.

The South African Women’s Open was staged at San Lameer for four successive years from 2014 and Lewthwaite – fresh out of college in the United States – won the Jackie Mercer Trophy as the leading amateur in the 2016.

The Benoni golfer chased Lee-Anne Pace for three days and finished second overall. Last year she produced an impressive tie for sixth in her rookie season as Pace took top honours for a third successive time.

With an impressive R350 000 purse and 450 points on the line, the 27-year-old Lewthwaite is relishing the opportunity to continue her improvement.

“I’m definitely coming back with positive feelings,” said Lewthwaite. “You’re always going to have good memories on a course that you’ve finished strongly on. The course is in great condition and the greens are running smooth and true.

“I’m really excited to play this week. I love this course and it suits my game. Hopefully we don’t have too much rain and the greens will speed up slightly, but overall, the course is pristine and I expect a really good tournament this year.”

The 25-year-old played a full campaign on the Symetra Tour in the United States last year and had a difficult time of it – making just one cut in 12 starts. Assad returned to South Africa at the end of the season to recharge.

“I thought I was well-prepared after playing the US Collegiate golf circuit for four years, but I had no idea it would be so tough to transition to the Symetra Tour,” said the Randpark golfer. “There is so much to adjust to, but it was a fantastic learning curve and I look forward to going back in March.

“I had a lot of time off during November, December and January and I think that’s why I had a few wobbles at the start of the season, but I have a lot of confidence after last week, so let’s see how it goes.”

It will be Assad’s first tournament at San Lameer, but her positive attitude and solid game could well see her in contention in the final round.

Coming to the slower surfaces common to the KwaZulu-Natal south coast after the slick greens at Fancourt took some adjusting, though, but Assad was feeling comfortable after her first look at the course during the Mayor’s Challenge Pro-Am on Wednesday.

“The golf course is really nice,” said Assad. “It’s the first time I’ve played here and I was surprised; the greens played a lot faster than I thought they would be. They are expecting rain tonight, which will slow the greens down, though. It took some adjusting after the fast greens in George.”

Seventeen nations are represented in the field of 78 players lining up at San Lameer, with the international and amateur campaigners vastly outnumbering the local professionals for the second time this season.

“When I made my debut in 2016, we had something like six international players and 10 amateurs. This week the foreigners number 35, which is more than we had at the Joburg Ladies Open, and 20 local professionals and 23 amateurs. It’s really incredible when you look at the numbers.”

After the SA Women’s Masters, there will be another event in KwaZulu-Natal – the SuperSport Ladies Challenge presented by Sun International will be held at the Wild Coast Sun Country Club. Then it is on to Cape Town for the season-finale Investec South African Women’s Open, which is co-sanctioned with the Ladies European Tour.

The prize money of R2-million is the biggest purse on the Sunshine Ladies Tour since 2014.