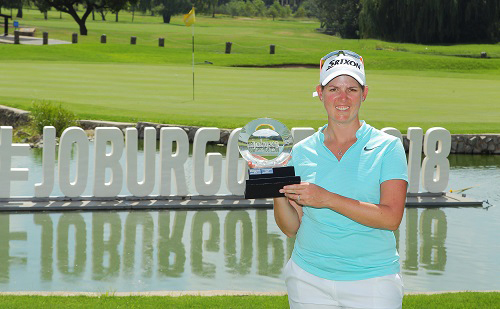 Buhai banked the the lion’s share of the R500 000 prize pot and a total of eight-under 208 earned her 650 points, which boosted her to the top spot of the Investec Property Fund Order of Merit.

“It’s great to leave South Africa with a double whammy, because I set myself some pretty steep goals this week,” said the smiling Buhai.

“I’m really pleased with this win. I had chances the first two years at Royal Johannesburg and Kensington, but I never made the most of my home course. It feels really good to add my name to the trophy; after all I’m a Joburg girl, so it’s fitting that I should win this one at least once.”

Stacy Bregman, who won the season-opening Canon Ladies Tshwane Open last week, and 19-year-old Ivanna Samu both launched a spirited final round attack, but it was too little, too late. Bregman fired a 67 and Samu 68 to tie for second 213.

Buhai maintained the good form that earned her a runner-up finish in Tshwane last week. She made make a flying start with an opening four-under-par 68 in City of Joburg showpiece and followed with successive rounds of 70.

“I made back-to-back birdies at 10 and 11 to go 10-under, and I had an eight shot lead with six holes to play,” said Buhai. “I guarded against not getting complacent, but the wind got a bit tricky down the last couple of holes and I did let my concentration slip just a touch.

“I overshot 16 and 18, because I couldn’t risk a shorter club with water in front of both greens, but at least the cushion was big enough to cover the bogeys.”

Buhai will miss the next three weeks to compete on the LPGA Tour in Australia, Thailand and Singapore.

“I really wanted to perform well to put myself in a good position this week and it feels incredibly good to achieve what I set out to do,” she said. “This gives me a big boost of confidence.

“I felt a bit rusty at Pretoria Country Club last week, but I improved round for round. My coach and I (Doug Wood) put in some work over the weekend and I struck the ball really well this week. I also started seeing my lines clearly, although I feel I need to work the putter some more, but I’m really looking forward to taking this game on tour.”

After dropping a shot at the fourth, Bregman put her foot on the gas pedal and reeled in four birdies on the trot. She picked up another pair of birdies at 12 and 14 for her 67. Samu also overshot the final green and her chip shot ran 12 feet past the hole, but she holed a clutch putt for 68.