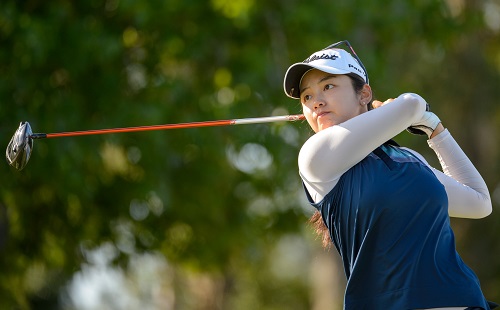 It’s her all-time favourite golf course and it showed as Carrie Park overcame a shaky start at George Golf Club to claim the first round lead in the Sunshine Ladies Tour Dimension Data Challenge on Friday.

The South Korean took the sting out of a double bogey at the opening hole with a birdie at the second and racked up four further gains to set the early clubhouse lead with a three-under-par 69.

“This is my last event before I have to return to Korea because the rest of the schedule conflicts with the Korean LPGA Tour, and I’m just where I want to be,” said Park.

“I really, really love George and this golf course. It’s been my favourite since I came out to South Africa eight years ago and I played a lot of amateur golf here. I’ve always wanted to win the Dimension Data event, because it’s one of the best tournaments on our schedule. It’s a lot of fun to play with the amateurs and there is such a great atmosphere at this tournament with the men and the women playing together.”

The reigning SA Women’s Masters champion was pleased with her comeback after a dreadful start.

“It was not the start I expected, so I was so relieved when I made a birdie at two,” said Park. “It got back on track and I birdied nine to get back to level. I birdied 10 and 11, but it’s not an easy scoring course. It’s very tight, so you have to make the par fives count. I made one more birdie at 16 and then I just hoped that I had done enough.”

Garcia got it to three under at the turn, but gave herself a lot of hard graft on the back nine with a double bogey at 10.

“I had a three-putt at the third for bogey, but I managed to cancel it and then we had quite a long wait at the turn,” said Garcia. “I just lost focus in the 10 minute wait. I got a flier out of the rough and short-sided myself and I didn’t hit a good shot and made a quick double.

“I struggled to get it back; made birdies at 11 and 14 but dropped a shot at 12. I wanted to be close to the top, so I’m pretty happy that I’ve put myself in a strong position with 36 holes to play.”

In-form Bregman won the season-opening Canon Ladies Tshwane Open and leads the Investec Property Fund Order of Merit after a tie for second in the Joburg Ladies Open and a top four finish in Cape Town. She dropped two shots in her outward loop but made up for it with birdies 14 and 16.

“I was going around steadily and then at the eighth, my approach hit something on the green and almost ricochet out of bounds,” said Bregman. “I nearly wrapped my pitching wedge around a tree at the last hole, but it came off and I made a great par. A bit of an up-and-down day, but I’m in a strong position. It was a good start.”

Jamila Jaxaliyeva – the first Kazakhstani to compete on the Sunshine Ladies Tour – moved into sixth place after she cancelled a quartet of bogeys with birdies at four, five, seven and 15.