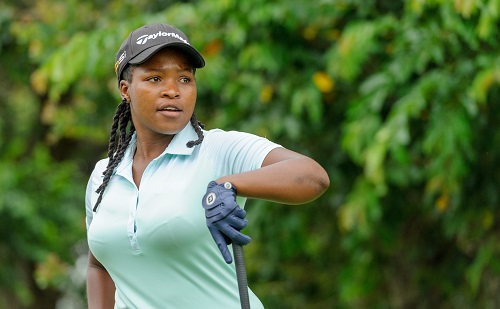 A victory to start her 2018 season. A new golf union and home course. A new home in Gauteng. These are some of the bold moves Zethu Myeki made at the start of the year as she prepares to write a new chapter in her golfing career.

Myeki celebrated New Year in her native East London, but three weeks into the year, the 24-year-old amateur moved to Randpark, joined Ladies Golf Gauteng and became a member at Randpark Golf Club.

Having lost the Border Championship title to Swiss amateur Chloe Grand by one shot last year, she’ll be out for blood at East London Golf Club this weekend. And then she is targeting the amateur prize at the SA Women’s Masters at San Lameer from 22-24 February.

“I played really well in the first two rounds of the South African Women’s Open at San Lameer last year, but I threw it all away with an 87 in the final round,” said South Africa’s number three ranked amateur. “I’m going back to KwaZulu-Natal with a much better mind-set, more experience and a much more all-round game, so I’m feeling positive about my chances.

At the end of a frustrating 2017 season – punctuated by four runner-up finishes and six further top five placings – Myeki celebrated a three shot victory captured at Ermelo Golf Club. And the good run of form continued at Sun City where, a week later, she outpaced the professional field in the Sun PinkStig Finale on the Sunshine Ladies Tour at the Gary Player Country Club to finish third overall.

For the last two seasons, the Border golfer maintained her third place ranking in the Womens Golf South Africa Senior Rankings, but she has set herself some lofty goals for 2018.

She is targeting a few more trophies to get her to the top spot, hence the move to Gauteng.

“My biggest goal is to complete my studies,” said the Ernie Els and Fancourt Foundation member, who just started her third year studying Golf Club Management through the Club Managers Association of America.

“My second goal is to shoot for the number one spot in the rankings. To give myself a realistic chance to get to number two, and then number one, I had to make this move. I have had the most amazing support from the moment I joined the South African Golf Development Board under their head coach Michelle de Vries 11 years ago and I’ll never be able to repay Michelle or the SAGDB for all they did for me to give me a career in golf.

“But to reach number one, I need to compete more frequently. I need to raise my game and I need to play against stronger competition. It was a really hard decision to leave East London, my family and friends and everything that is familiar to me, but I’ve done the best thing for my career. With the support of the Ernie Els and Fancourt Foundation and Ladies Golf Gauteng, I believe I can succeed.”
Myeki relocated just before the first GolfRSA Elite Squad camp at Bryanston Country Club.

“I gain so much from the camps and this time, in particular,” she said. “I’d really been struggling with my swing. Our National Coach Val Holland and my new coach Constanza Trussoni identified some of the issues and I was able to work on my swing before the Eastern Province Champs.

“It wasn’t 100 percent when I arrived in Port Elizabeth and I struggled to hit the ball with confidence. My short game saved me, though. I made so many great up-and-downs and sand-saves and I putted really well. It felt really great to win after losing the last two years by one shot.

“All-in-all, I am in a really good place. I have the backing of GolfRSA, Womens Golf South Africa and the Ernie Els and Fancourt Foundation. I have a good home with Judy (Katzenellenbogen) and my studies are going well. I’ve been welcomed by Ladies Golf Gauteng and Randpark Golf Club. I’ve enlisted a new coach. Everything is in place and I set the tone for my season in Port Elizabeth. I’m ready to face all the challenges 2018 will bring.”

END_OF_DOCUMENT_TOKEN_TO_BE_REPLACED

Abt appointed Deputy Commissioner of the Sunshine Tour