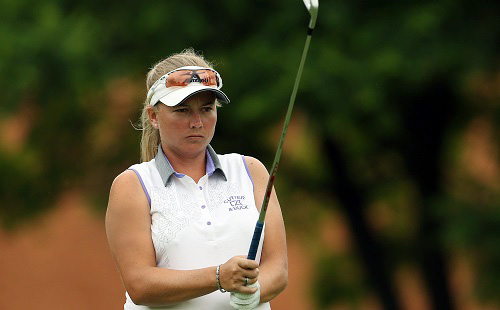 Three-time Sunshine Ladies Tour winner Kim Williams was in familiar territory after a four-under-par 68 earned her the first round lead in the SA Women’s Masters on the south coast of KwaZulu-Natal.

Williams teaches full-time at Centurion Country Club and a below par start to the 2018 season was expected after 12 months away from competitive golf, but the former number one ranked amateur signalled a return to form with a top five finish in the Dimension Data Ladies Pro-Am last Sunday.

With the greens receptive after 40mm of rain overnight and the weather sunny and warm, Williams made the most of an early start to fire at the flags. She racked up four birdies in her outward loop and she wasn’t the only one cashing in.

Nineteen players in the field of 78 dipped below par through the first nine holes, however, a strong Westerly wind put the brakes on the birdie fest and a big dent in the red numbers.

“The wind came up quite suddenly and club selection was extremely tough, because it gusted and swirled,” said Williams

“It was tough to play the two-to-three club wind and keep a clean card. I parred the first six holes, had a soft drop at seven and then nearly holed out at the ninth. The hole was playing 145 metres downhill with the wind helping from behind.

“I hit a soft 7-iron and it pitched right in front of the flag and rolled up to tap-in distance. It was really nice to finish with a bonus birdie. I knew I could do well coming into the week after I found some really good form last week. Now it’s just a matter of keeping that form going.”

Ladies European Tour Access Series player Bruun made a solid start with a tie for 14th in the Joburg Ladies Open and sealed a joint 16th finish in the Cape Town Ladies Open. She contracted food poisoning during the Dimension Data Pro-Am, but rallied with a final round 74 at the Outeniqua course to close out a top 10 finish.

The Norwegian was feeling confident after stepping off the San Lameer course in joint second.

“I had three birdies and just one bogey and I never missed a fairway. Compared to some of the other courses, this one only measures 5 644 metres (6 171 yards),” said the 23-year-old from Larvik. “I really love this course, because it suits my game. It has a lot of trouble, but I hit it straight and I have a good short game. I rolled it nicely on the greens and hopefully I can warm up the putter some more on Friday.”

Second-season professional Ivanna Samu held a share of the lead after she eagled the par four 12th and birdied 13, but the 19-year-old dropped 14 and finished with a triple bogey seven for a 71.

“I hit my tee shot right and then took on a shot I shouldn’t have,” said Samu. “I should have punched out to the fairway, but I had a clean shot to the green and went for it. As I came through the shot, the wind came up strong and I watched as my ball drifted out of bounds. I live and learn and I’ll come back fighting again tomorrow.”

The chase for the leading amateur prize – the Jackie Mercer Trophy – got off to a fast start.

END_OF_DOCUMENT_TOKEN_TO_BE_REPLACED

Big target on Bregman’s back at Wild Coast