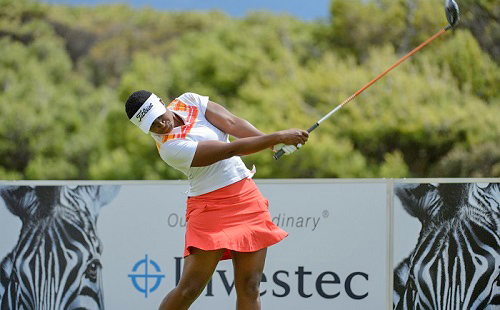 Nobuhle Dlamini no longer feels like a long shot. Still wrapped in the afterglow of her maiden breakthrough in the SuperSport Ladies Challenge last week, the big-hitting Swazi golfer jetted into the City of Cape Town on Tuesday, ready to fire in the Investec South African Women’s Open.

“Now that I got rid of the monkey on my back, I feel like I can do anything,” Dlamini said. “I’m still celebrating inside, because it was such a long time coming. There was always one thing or another holding me back; a bad first round, a cold putter in the last round, or nerves.

“I’ve been building towards a win and I knew I just needed to stay patient. Last week I had control of everything for three rounds at the Wild Coast Sun. I won so many titles as an amateur, and I’ve got that winning feeling back. Finally. It’s a great feeling to carry around.”

The Ladies European Tour season, however, only just kicked off.

Not only will the winner bank lion’s share of the prize money worth R317 000, the trophy comes with Ladies European Tour exemption until the end of 2019 and world ranking points. Most importantly, success on Saturday will guarantee the 2018 champion starts in two of the season’s five majors – the Ricoh British Women’s Open and the Evian Championship.

“With those kind of incentives on the table, you’re going to have to play to win this week and that’s what I’m here for,” said Dlamini.

“It’s going to be tough. We played the pro-am on Wednesday in winds gusting up to 45 km per hour and that’s the forecast for all three days of the tournament. Although I never played Westlake, I played a lot of golf in the wind in Cape Town, so I’m pretty confident with my skills in the wind.”

“No, windy conditions doesn’t worry me,” said the 27-year-old.

“I played a practice round of Tuesday in much the same conditions. The challenge is come over the first three holes, because the wind is very strong into you. On the other holes, it either helps you or it’s off the side.

“You can actually use it to your advantage, because it’s a tight course and tree-lined. But you’ll have to keep it play. The greens are rolling very true and they’re a really nice speed. The course isn’t that long, so you can take any club in the bag, but if you don’t hit fairways and greens, you won’t score. The winning recipe this week is fairways, greens and a hot putter.”

Dlamini is just over 350 points behind Investec Property Fund Order of Merit leader Stacy Bregman, who is equally keen to wrap her hands around the trophy.

“Well, firstly I’d like to win the points list, because that’s worth R100 000 and it’s something really special to be the best player over a season,” Bregman said. “Obviously I already have Ladies European Tour membership, but a win would mean teeing it up in two Majors. That’s huge.

“I plan to split my time between Europe and the Symetra Tour in the United States this year. It would a massive step if I had guaranteed starts in two majors; it would take a lot of pressure off.”

Three-time champion Lee-Anne Pace will be gunning for a record fourth successive victory.

She admitted that the job got even tougher with two Majors starts on offer.

“For sure that has upped the ante this week and every one of the 123 players in the field will be playing for victory,” said Pace. “Everyone will come out the blocks firing and firing hard. There’s very little I can control other than my own game, so I’ll just have to make sure that I make a great start to put myself with the frontrunners from the get-go.”

Entry to watch the golf and partake of the food trucks and entertainment is free all days.
Spectators are invited to picnic with the champions on Saturday – just register for free entry at www.quicket.co.za/events/41338-investec-south-africa-womens-open/#/