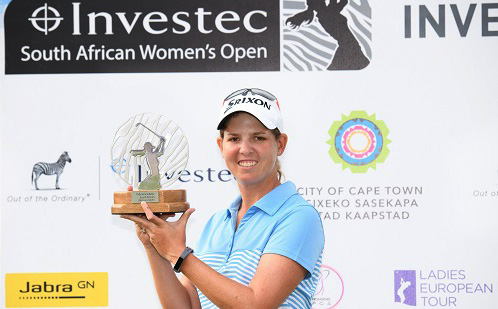 Ashleigh Buhai wrote her name in the record books of the Investec South African Women’s Open once again, thanks to a two-stroke victory at Westlake Golf Club in Cape Town on Saturday.

The only amateur to win the national championship twice – and the youngest champion to boot – fired a flawless final round 67 to realise a dream she’s nurtured since she joined the pro ranks in 2007.

“I’m absolutely ecstatic. I knew I had to play really well today and that’s what I did. I just felt really focused the whole day and hit all the shots I needed to and holed a few good putts,” said Buhai, who triumphed on -under-par 207.

“No matter what country you’re from, you want to lift your national title. Having won it twice as an amateur was a bit crazy, because the first time I won it I was just 14. The older you get, the more you realise what it means to you. To finally win it as a professional is priceless. I’m very chuffed.” 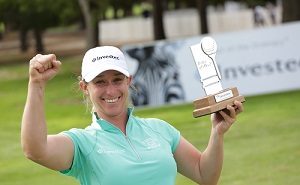 The Johannesburg golfer hit a magnificent bunker shot to three feet to up-and-down for par at the 18th to bank the R100 000 bonus as the Sunshine Ladies Tour Investec Property Fund Order of Merit winner.

Bregman, who won the season-opening Canon Tshwane Open, also closed with a 67.

“I didn’t have the best start to the week, but I came out today and wanted to do really well,” said Bregman, who finished in fourth place on three-under 213. “I knew that I had nothing to lose and to finish off the way that I did, it teaches me a lot about myself, that I have what it takes at clutch moments like that. I knew what I had to do and to pull it off was just magical.”

Buhai started the day on four-under and one shot off the pace, behind Karolin Lampert.

The German overhauled Buhai for the second-round lead with a 69, but Lampert didn’t hold on to pole position for long. Making the most of the tranquil conditions, Buhai closed the gap with a birdie start and moved to seven-under with back-to-back gains at the fifth and sixth holes for a two-stroke lead.

Long-hitting Lampert birdied the par-5 seventh to narrow the gap, but missed an opportunity to tie for the lead when her birdie putt on the ninth from five feet moved below the hole.

Buhai then birdied the 10th to regain her two-stroke advantage and stretched that to three strokes when Lampert bogeyed 11. Both players birdied the long 13th and Lampert made a fantastic putt from the back of the 14th green, only to drop a shot on the short 15th.

Buhai had birdie chances on 16, 17 and again at 18, where her birdie putt slipped past the hole, leaving her a tap-in for par.

Lampert was thrilled with a strong start to her season after she signed off with a 70.

“I wanted to post a sub-par round and I was really pleased to do that,” said former LET Access Series winner Lampert, who now has her sights set on a Ladies European Tour title in 2018. “Ashleigh played really well, a 67 and more chances on the back nine, so it was really hard to keep up with her. I’ve been pleased with my game all week and happy to finish second.

“I’m so pleased that I decided to start my season at the Investec SA Women’s Open. I’ve been working on my swing in the off-season to get some more length off the tee and I did that here, so it was a good decision to stay a bit longer off the course. Today I hit it longer than I expected, even with my irons.”

Moroccan Maha Haddioui ended in third place on four-under-par, which was her best result since she earned her Ladies European Tour card in 2013. 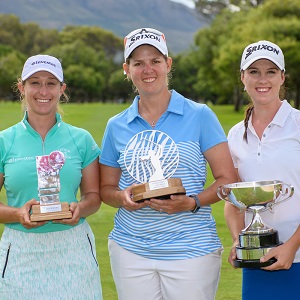 “It feels really good. I had a tough time in Australia and didn’t play great. I loved being in South Africa. Finishing third here and having my best finish on the LET is really awesome. The course suited my game and I think the key was just playing smart. I played chicken a lot of the time and didn’t go for the pins, but I putted well and it really helped me this week.

“It’s more special to be in Africa, on my home continent. Even though I’m really far from home, I still feel at home, somehow. I really like being in South Africa and I haven’t been for a few years. I’m going to go and see the penguins today, so I’m really excited.”

Three-time LET winner Florentyna Parker closed out the top five. The English golfer carded a final round 70 to finish at two-under-par 214.

The final trophy during the prize giving was awarded to Gauteng North golfer Lindi Coetzee.

The 18-year-old used the experience gained from playing with professionals in five Sunshine Ladies Tour events to make the cut and lift the Jackie Mercer trophy as the leading amateur in this year’s national open.

Written by and released by Lali Stander and Bethan Cutlet on behalf of the Sunshine Ladies Tour, European Ladies Tour and WPGA.