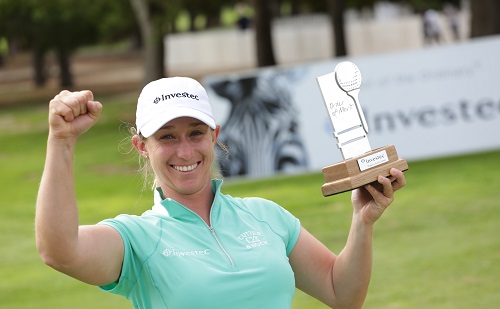 JOHANNESBURG – Another bumper season awaits the leading lights of South African women’s golf, and international participants from around the globe, when the Sunshine Ladies Tour tees off in 2019.

The tour launches on 30 January, and the prestigious Investec South African Women’s Open will fittingly draw the curtain on the sixth season in mid-March. The crown jewel of South African women’s golf will once again carry Ladies European Tour co-sanctioned status and boast a purse of R2 million.

“When we launched the Sunshine Ladies Tour in 2014, we could not anticipate how incredibly well the circuit would be supported by players and sponsors alike,” said Sunshine Tour Chief Executive Selwyn Nathan.

“Thanks to initial investment and the ongoing commitment from Investec Property and support from the primary key stakeholders and sponsors Dimension Data, Sun International, the City of Joburg, the City of Cape Town, the City of Tshwane, SuperSport, Canon and the Ray Nkonyeni Municipality, the Sunshine Ladies Tour has shown tremendous growth over the last five years.

“Participation has increased tenfold, with more than 40 international golfers playing the full circuit last year. Prize money has quadrupled from the first season, and the knock-on effect for our rising amateurs has been fantastic, with many young golfers flourishing on the international stage over the past two years.

“Investec Property has been with us every step of the way since the first season and has continued to find ways to make the Sunshine Ladies Tour more attractive.

“The 2018 Investec South African Women’s Open, co-sanctioned with the Ladies European Tour, raised the profile of our national championship to global status. The Investec Property Fund Order of Merit, which was launched in 2018 with a bonus pay-out of R100 000 to the leading player at the end of the season, cultivated a well-supported and highly competitive circuit.

“We are confident of hosting another memorable season in 2019, culminating in the Investec South African Women’s Open in Cape Town.”

Cheryl Leicher, Head of Marketing for Investec Property, said the partnership with the Sunshine Ladies Tour aptly showcases the incredible talent of women in sport and ensures that the athletes are recognised for their dedication.

“We are thrilled that the Investec South African Women’s Open is a platform that can aid the promotion and growth of South African women in sport. It’s encouraging to see that our partnership with the Sunshine Ladies Tour is giving local players the opportunity to compete on a global stage and further the growth of the sport as we continuously strive towards building women champions,’ said Leicher.”

The 2019 season kicks off with the Canon Sunshine Ladies Tour Open at Irene Country Club from 30 January to 1 February.

The Soweto Country Club makes its first appearance on the women’s professional circuit as the host venue for the Joburg Ladies Open from 6-8 February. The Dimension Data Ladies Pro-Am returns in its regular slot opposite the Dimension Data Pro-Am from 15-17 February in George.

The Sunshine Ladies Tour then swings through KwaZulu-Natal for the South African Women’s Masters at San Lameer Country Club from 21-23 February and the SuperSport Ladies Challenge, presented by Sun International, at the Wild Coast Sun Country Club from 26-28 February.

Margie Whitehouse, the returning chair of the Women’s PGA of South Africa, added:

“As the oldest and most prestigious professional women’s golf tournament since 1988, the Investec South African Women’s Open is the WPGA’s flagship event. On this 31st anniversary, we would like to extend our sincere thanks and appreciation to Investec Property for their sponsorship, as well as to the City of Cape Town for their continued support.

“We would also like to express our gratitude to all our other partners and sponsors as we look forward to a successful 2019 season.”