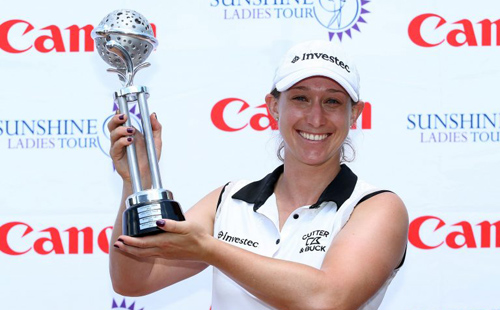 The sixth season launches with the R200,000 event at Irene Country Club on 30 January.

Last year she ended a three-year winning drought when a closing 71 at Pretoria Country Club helped her towards a four under par total and four-shot victory for her fifth triumph.

Bregman travelled to the United Arab Emirates earlier this year for the Fatima Bint Mubarak Open on the Ladies European Tour. “I took time off over the festive season, so I wasn’t very sharp. And I got the bad side of the draw with really windy conditions in the first two rounds, so I was really pleased to kick off the season with a top 16 finish.”

Since she returned from Abu Dhabi, Bregman has been hitting the gym hard and working with her coach, Grant Veenstra. She feels positive heading to Irene to defend the title and her 2018 Investec Property Order of Merit crown in the season-opener.

“It’s always nice to play at home, especially when the weather turns warm,” said the Country Club Johannesburg golfer. “I have always enjoyed playing Irene, because it’s a thinker’s course and if you are swinging it well, you can go low.

“Being the defending champion is an added bonus. It doesn’t happen as often as you would like, so it does put a bit more pressure on you, but I always enjoy a bit more stress. I’ll have a good week regardless.”

Bregman said it’s always nice to draw on positive memories at the start of the season.

“It was a very exciting finish. I hit some smart shots to stay in front and played more conservatively at the end, relying on my short game. I’m really strong off the tee, but I live by my short game. It’s a huge part of my game. “I’m very happy with a lot of aspects of my game. I need to put it all together on the golf course to have a win, but there are a lot of positive signs. My expectation is the same every time I play. You’re trying to play as well as you can to get yourself into contention for the final round. I know that if I can get myself into that position I can win coming down the stretch.”

Bregman expects tough opposition from the leading South African players, who will also be keen to get a foot on the Investec Property Fund Order of Merit ladder in the first event.

“It’s a strong field and it should be a really good event,” Bregman said. “If I’m in the mix, I will push really hard. It would be great to win the first one; it really sets you up for the rest of the tour.

“The course has lots of trees, but it’s quite open and there is not a huge amount of rough. If the weather stays nice, we’ll see very good scoring.”

“The Sunshine Ladies Tour has enjoyed tremendous growth and support since its inception in 2014 and is certainly the most illustrious ladies’ professional circuit in Africa,” Eitzen said.

“Canon is once again proud to sponsor the Canon Sunshine Ladies Tour Open, which is traditionally the kick-off event when some of the best female golfers in the country and the world, convene for the start of the season. We are certain that the 2019 edition of this prestigious event will once again showcase tremendous skill and unrivalled sportsmanship and we look forward to watching the tour unfold over the next few months.”