Ashleigh Buhai sounded a warning shot to the field of the Canon Sunshine Ladies Tour Open field with a flawless five-under 67 in the first round at Irene Country Club on Wednesday.

The bogey-free round for Buhai meant she opened up a three-shot lead in the 54-hole event over countrywoman Symone Henriques and Namibia’s Bonita Bredenhann, who both carded tidy opening rounds of two-under 70.

Buhai ended the 2018 season on a high note, winning the Investec South African Women’s Open for a third time, and the Royal Johannesburg and Kensington golfer was understandably chuffed with her first competitive round of 2019.

“I’m very happy with the way I played with it being my first tournament back after I took five weeks off starting in December,” said Buhai.

“I started practicing three weeks ago, and I was very happy to put what I was working on into play. I had five birdies and no bogeys, so a very good result at the start of the season.”

When Buhai missed shots, they were in the right places and her short-game came through with flying colours.

“I made a lot of good saves and my short game was very sharp, considering I haven’t played that much. My coach Doug Wood and I have a plan and we’ve worked on that. Consistency-wise I was never really in trouble, even my bad shots were just right or just off the green. They weren’t difficult up-and-downs so that also made it a little bit easier for me to make those pars.”

Following a second place finish on the final Order of Merit last year, Buhai produced some strong performances abroad which saw her end the year as the top-ranked SA player on the global stage.

At 116th in the Rolex Women’s World Golf Rankings, Buhai is some way ahead of Pace, with SA number three Bregman even further back at 308th.

“I was happy with the way I finished off last season,” Buhai said. “There was definitely some inconsistency and we’ve built something into my swing which I hope will help me with that.

“I played a lot of golf last year, I think it was 31 tournaments. I’m looking to space things out a lot better this year and hopefully play well in the bigger events and then to not have to play as much golf either.”

Husband Davis is back on the bag this week, a partnership which clearly works on local shores.

“Dave is back on the bag when I’m in South Africa, but when I compete abroad, I use Gary du Plooy from Zimbabwe,” Buhai explained. “He’s been caddying for me for just over six months now. I enjoy it when Dave caddies for me, since he knows my game the best, but I think it’s good to have that time apart when we hit the long run in the States.”

The 29-year-old has a busy schedule ahead, and will not have much time to dwell or savour from this week’s event.

“I leave for Australia on Saturday, where I will be play three weeks and then I’ll come back for the Investec SA Open. Straight after Westlake, we leave for the United States for a six-week stretch.” 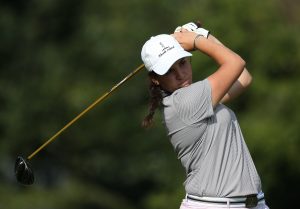 Symone Henriques will also be heading for the United States, although not as quickly as Buhai.

The Glenvista amateur will be taking up a golf scholarship at East Carolina University in North Carolina in August.

“I’m excited to play the Sunshine Ladies Tour without the pressure of school and to take in as much as I can from the pros,” said the 18-year-old. “I also hope to get into seriously competitive shape for the national amateur circuit. It would be great to win one more time before I leave.”