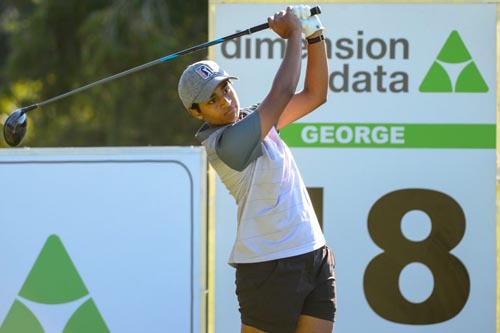 Randpark amateur Kajal Mistry stole the headlines on Friday after she birdied the closing hole at George Golf Club to tie Marion Duvernay from France for the Sunshine Ladies Tour Dimension Data Challenge lead on Friday.

Recent Serengeti Team Championship winner Duvernay’s sub-par 71 went uncontested for most of the opening round, triggering hopes of a French double on South African soil. But the 18-year-old Mistry – playing in the final group – hit two great shots at the final hole and boxed a five-foot putt to force her way to the top of the leaderboard.

“I took driver off the tee and left myself 131 metres to the pin middle back,” said the former GolfRSA Elite Squad member who cancelled bogeys at seven and eight with birdies at nine and 13.

“I don’t how it happens, but somehow is always above your feet at this golf course. I had to take that in account and, coming from altitude in Johannesburg, I had do recalculate the distance. I played it about 140-ish and I wanted to leave myself with an uphill putt, so I hit a full 8-iron in. It landed pin-high left and as soon as I saw the line, I knew I could sink it.”

South Africa’s former number one amateur matriculated from Crawford College Lonehill last year and is heading to the University of Arkansas on a golf scholarship in August.

“Golf had to take a back seat last year, so it’s great to be out here, competing again,” said the Ernie Els and Fancourt Foundation member. “I got the rust off with a top 20 in the Canon Sunshine Ladies Tour Open and I played nice, steady golf today. I hit 10 fairways and 13 greens today, but I was never in any real trouble. No bushes and no lost balls, just a steady round. I have to admit it’s great to be in the hunt again.” 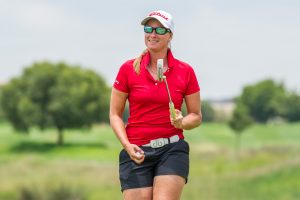 By contrast, the French golfer handed in a rather colourful card that featured six birdies.

“I made some great birdies over the first nine holes, and had only the one bogey, but I had a bit of a bogey run coming back,” said Duvernay, who turned three-under.

“I dropped 12 and 13, finally birdied a par five (14) and made a double at 15. I missed the green and had to chip from thick rough, but I only moved the ball a metre with my first chip. I gave the second one a good whack and two-putted. I was very happy with the birdie at 17 to get back in red numbers.”

Duvernay showed her mettle in team events when she partnered compatriot Flora Peuch to victory at Serengeti Estates last week. The Evian Resort golfer dovetailed to perfection with amateur Joanne Govender for a six-under-66 that netted the pair a share the lead in the Betterball competition.

“When I hit the bogey train, Joanne really pulled us through,” said Duvernay. “She made three birdies in a row from 12 to keep the momentum going. And we had a lot of laughs. It’s such a fun format.”

Niinja Liias from Finland finished level-par to tuck in just behind the leading pair, avoiding the crush at one over par.

Lejan Lewthwaite and Bertine Faber both carded rounds of 73 to lead the local challenge and were joined by French pair Emilie Piquot and Anne-Lise Caudal, English campaigner Rachael Goodall and rookie Sophie Lamb, also from England.

South Africa’s Ivanna Samu and Brittney-Fay Berger completed the top 10 on two over alongside Pasqualle Coffa from the Netherlands.

Written and released by Lali Stander on behalf of the Sunshine Ladies Tour and WPGA.ng or copying it.