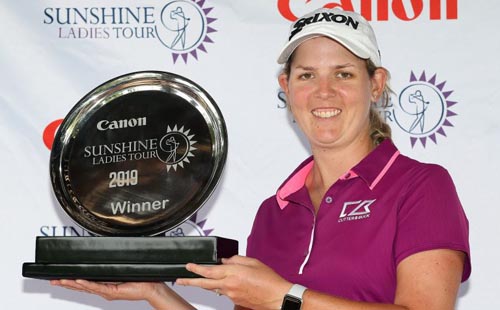 She could not match her opening two rounds of 67 and 68, but with a lone bogey over three rounds, the win was never in doubt and she pushed her winning tally on the local circuit to 10 with a final round one-over 73.

Defending champion Stacy Bregman soared up the leaderboard with a closing four-under 68 to finish second on her own at four-under.

Yet another South African Lejan Lewthwaite also made strides with a third round 68 to take third on two-under. England’s Lauren Taylor was fourth on one-under and former Investec South African Women’s Open champion Tandi Mc Callum from South Africa completed the top-five on level par for the week.

“I’m very happy to pull off the win this week in the first tournament of the year,” said Buhai, whose only drop in the tournament was a soft bogey at the 52nd hole.

“Today was quite scrappy, but that’s just what you have to do to try win. Thank goodness there were no pictures on the scorecard. I learnt that I just had to stay patient and keep grinding.

“The course I played a little tougher. There were some low scores, but thank goodness I had that seven-shot lead starting the round. I knew I had that comfort zone. After nine, I knew I wasn’t going to hit it close, so I just started going for the big part of the greens and taking my two-putts to make as many pars as I could coming in.

“I think a few years ago I would have got more frustrated with myself, and probably made quite a few more bogeys. Today, I trusted my ability, especially with my putter. I made one bogey in 54 holes, so I’m really chuffed with that.”

Despite the comprehensive triumph, the 29-year-old Buhai said she was not totally satisfied.

“My goal was to get to double-figures, and then push on from there. When I had a six-shot lead with nine to go, it was just about grinding it so no one could catch me. Double figures was still my goal, even coming down the last. I was still trying to make birdie even though I just bogeyed 17.

“Overall, it was a good tester to see where I’m at and where I can improve. The main positive is that if I’ve got a sharp short game when I’m not hitting it well, I can still score.”

Buhai had just hit her tee shot into the par three 13th when play was suspended due to lightning. It turned out to be a short delay, with the players resuming within the hour. The disruption was far from ideal, but Buhai was still up to the task of closing out an emphatic victory.

“On 13, I hit one of the few iron shots that I flushed the whole day,” she said. “I thought I finally got something going and then we went off. I just had to accept it. Luckily we weren’t called off for too long. My first drive back, my hand slipped in the rain and I hit it out right. I had to punch out but I got it up-and-down from 60 metres to keep the momentum going. Overall, I’m happy with the week but disappointed with today.”

“Any time you shoot under par, you take the positives out of that,” said Buhai. She paid tribute to the sponsors for helping the event proceed.

“A huge thanks to Canon for coming on board and for sticking with us these last three years,” said the world number 116. “Without sponsors, it wouldn’t be possible. And to Investec, they have been our biggest supports and it’s great to have them on board again. The Sunshine Ladies Tour is growing every year and that’s what we want to see.”

Buhai leaves on Saturday to compete in two LPGA events and one LET event in Australia and returns in March to take up her title defence in the R2-million Investec South African Women’s Open at Westlake, which is co-sanctioned with the Ladies European Tour.

Bregman, who won the 2018 Investec Property Fund Order of Merit last year and former LPGA Tour winner Lee-Anne Pace, who withdrew after nine holes in the second round after the onset of a migraine, will also be making the trip down under.

Eighteen-year-old Symone Henriques was second after an opening round 70.

She slipped from contention with an 80 in the second round, but bounced back to overtake fellow GolfRSA Elite Squad player Kajal Mistry with a final round 74 to win the amateur honours on eight-over 224.

The Sunshine Ladies Tour moves to Serengeti Estates next for the inaugural Serengeti Team Championship on 5 and 6 February. Teams of two will compete in the Betterball format for the lion’s share of the R100 000 prize fund.