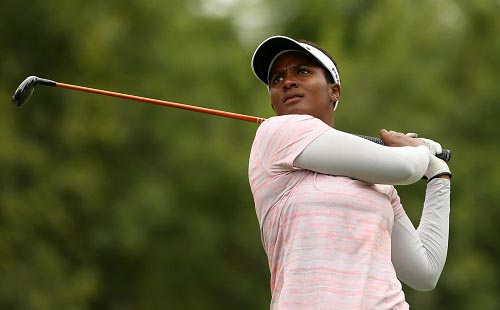 This time last year, Nobuhle Dlamini could be forgiven for wondering when she would get that first victory after a number of near-misses.

Now, when the 27-year-old stands on the first tee on Thursday at the South African Women’s Masters at San Lameer Country Club, it will be as a three-time winner and current leader of the Sunshine Ladies Tour Investec Property Fund Order of Merit.

It all changed at the Wild Coast Sun Country Club – just a short drive down the road from San Lameer – at the end of February a year ago.

The big-hitting Swazi golfer finally broke through for that maiden triumph in the SuperSport Ladies Challenge.

Since then Dlamini has added two victories to her tally, with the latest coming at the Dimension Data Ladies Pro-Am in George last Sunday and it’s no surprise then, that the Glendower Golf Club talent has transformed into the form player on the local scene.

With a new-found self-confidence, Dlamini believes the wins will start mounting.

“I want more wins, and what better place to do that than this week?” said Dlamini. “I really believe I’m a winner now. Winning the First Stage of the Ladies European Tour Qualifying School and doing well in Final Stage reinforced my belief that I can compete on the global stage.”

Dlamini knows there will be no overpowering the testing layout at San Lameer.

“I love the Wild Coast and can’t wait to go back and defend my title and I would love to win here this week, but San Lameer is tricky. It’s a real test of patience when the wind is up. I think that the more you compete here under different conditions, the better you get at judging shots, reading the wind and picking the right lines,” she said.

One of her numerous close calls since the Sunshine Ladies Tour launched in 214 in fact happened at last year’s South African Women’s Masters. She tied for second after chasing winner Laura Fuenfstueck from Germany over the closing holes.

One of the trends for Dlamini last year was one bad round, often on the first day.

That’s still in the back of her mind, but few would bet against Dlamini permanently dispelling those demons.

“I’m taking loads of confidence into the event this year,”” she said. I would love to own the SA Women’s Masters and SA Women’s Open titles, so I’m hoping to make a really fast start and not be on the back foot after round one like last year.”

Dlamini though, won’t have it all her own way.

Lejan Lewthwaite chased Lee-Anne Pace all the way to the finish line in 2015 to finish second in the SA Women’s Open and lift the Jackie Mercer Trophy as the leading amateur at San Lameer. The Serengeti professional will be nipping at the Royal Swazi golfers’ heels after two top-three finishes already this season.

A third place at the Canon Sunshine Ladies Tour Open in Irene and a tied second place finish last week at the Dimension Data Ladies Challenges sees the 28-year-old former Texas University standout in second place on the Order of Merit. On 620 points, she is just 77 behind the 697-point tally of Dlamini.

Making a return to competitive golf due to a lengthy lay-off after back surgery, the 20-year-old had a quiet start at the Canon Sunshine Ladies Tour Open with 10th place on four-over.

However, Samu finished alongside Lewthwaite at Fancourt on level-par and just two shots behind Dlamini. The result shot the Ruimsig golfer up the Order of Merit, and the confidence gained last week could mean a win is around the corner.

Young amateur Kajal Mistry could also be a factor this week.