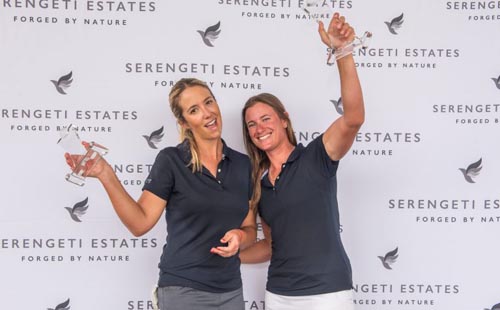 Marion Duvernay and Flora Peuch became the first French winners on the Sunshine Ladies Tour with a wire-to-wire performance in the inaugural Serengeti Team Championship on Wednesday.

The French pair posted rounds of 46 and 38 for a total of 85 points to win the first golf team event with a three-point margin at Serengeti Estates.

Duvernay and Peuch made a fast start to the tournament as they burned up the front nine of the Jack Nicklaus signature course on day one. They fired five birdies and surged into the lead with an eagle from Duvernay at the par five eighth. Another eagle from the Evian Resort golfer and further brace of birdies earned them a three-point lead over English pair Kiran Matharu and Ellie Givens.

Admittedly, the French duo couldn’t replicate their first round fireworks on the last day, but they staved off the chasing pack with birdies at three, five, eight, 11 and 15.

“Marion hit her drive in the bush and of course, I followed her. We had to make a recovery, but it’s a pretty long par five. She went for the green from 235 metres, but didn’t make it. She had to take a penalty drop after going in the water, so I laid up and chipped in.

“Then I three-putted and Marion didn’t make her bogey putt either, so we had to take a zero for the double bogey. We took it on the chin and just tried to play the last two holes in pars and make no more mistakes.”

Peuch made sure of a par at 17 and Duvernay, whose approach pitched on the lower tier of the huge green, lagged her birdie putt to two inches from the hole. She tapped in for par to seal the win.

“We are so excited about this win,” gushed Duvernay, who made her debut on the South African circuit with a top eight finish in last week’s Canon Sunshine Ladies Tour Open.

“When the team event was added to the schedule, we entered immediately. We played a lot of team golf as amateurs, but there are just a few team events on the pro circuit. It was a great tournament on a fantastic golf course and we are thrilled to own our first Sunshine Ladies Tour trophies.

“The vibe was fantastic and it was a great way for us foreigners to meet the South Africans and other internationals. We saw a lot of high fives and hugging and laughing going on. Flora and I are travelling together for the full nine weeks, so this was a very good test for our friendship, too.

“Flora has told me that the Dimension Data Ladies Pro-Am is another great event, but the courses are quite tough. This has been a really good warm-up for George and hopefully one of us can keep the winning streak going.”

Rookies Catherine Lau & Georgia Oboh from Nigeria tied for third on 82 with Givens and Matharu, as well as Tandi McCallum and Kim Williams from South Africa.

South Africa’s De Lange and Coffa from the Netherlands fired a staggering nine birdies on the last day to take the low round honours with 45 points. “I met Shawnelle last week at Irene and we clicked straight-away,” said Coffa. “We decided to pair up for the team event and we really dovetailed well, especially in the final round.

“For every birdie I sunk, she answered with one. I struggled a bit last week and shot 80 in the final round at Irene, but this tournament gave me a chance to hit more free and to fire at the pins. I feel much more confident for George Golf Club and Fancourt next week.”

GolfRSA Elite Squad member Kiera Floyd from Ebotse Links and Kim de Klerk from Mossel Bay Golf Club posted rounds of 39 and 41 to take the Amateur honours with a top 10 finish on 80 points.