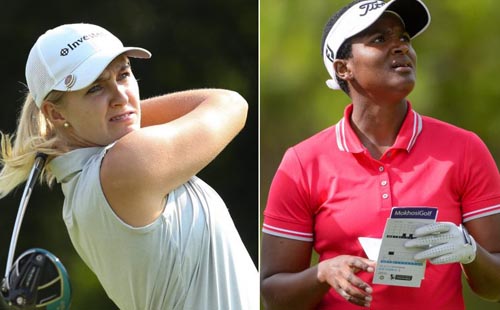 Double trouble from the Duma sisters. French flair from Marion Duvernay and Flora Peuch. An English assault from Kiran Matharu and Eleonor Givens. The sparks are bound to fly when the inaugural 36-hole Serengeti Team Championship tees off on Tuesday.

The 36-hole team event at Serengeti Estates will see 24 teams of two vie for the lion share of the R100 000 prize money. Home course favourite Lejan Lewthwaite has boosted her chances of a maiden Sunshine Ladies Tour win by roping in two-time champion Nobuhle Dlamini.

The Benoni golfer believes they have what it takes to win the Betterball tournament.

“With my course knowledge and Nobby’s huge drives, how can we fail? We are all extremely excited to get going. Betterball is so much fun and, with the best score to count on each hole, you better believe the girls will be firing at the pins,” said the Benoni golfer.

Lewthwaite and Dlamini made the trip to Morocco together to compete in the Final Stage of the Ladies European Tour in December. “We got along brilliantly and it was a no-brainer that we would team up for the Serengeti Team Championship,” said Dlamini from Swaziland.

“Lejan is the spokesperson and I am the quiet strength of this partnership. We know the strengths of each other’s games. She knows the greens really well and she’s coming off a third place finish in the Canon Sunshine Ladies Tour Open, so she is really fired up. That’s half the battle won.”

Lewthwaite believes her partner’s booming drives will give them the edge.

“The fairways are quite generous, but the course is heavily bunkered, so you need to be accurate off the tee and manage your second shots well,” said the Investec golfer. “Nobby drives it long and straight, which is key to scoring at this course. My short game really came alive at Irene Country Club and the putter went hot, so I believe we are in with a shout.”

Yolanda and Siviwe Duma from East London are equally confident of their chances.

“Siviwe and I started playing golf together as kids, so I don’t think there is another pairing in the field that know each other as well as we do,” said Yolande. “She has the long game and I am the better putter. We will play to our strengths. Usually its sibling rivalry, but we’re playing for each other this week. It would be amazing to win with my sister.”

As soon as the new event was announced, she booked three-time champion Monique Smit as a partner. “Monique is one of the most consistent players on the tour and it’s wise to play with someone local that can guide you,” Pietri said. “We’ve known each other for a while now, and I knew we would have a lot of fun.

“We had a great practice round and made a bunch of birdies. The course is immaculate and the greens are rolling so true. They are big, with a lot of slope, so you will need to put your approach shots close. I’m looking forward to the tournament. It’s a fantastic concept.”

Another rookie pairing to watch are Nigerian rising star Georgia Oboh and South Africa’s Catherine Lau, who earned a card for the LPGA Tour of China with a third place finish at Q-School in January.